Last week, I wrote about low cost quad core tablets based on Actions Semi ATM7029, and today it’s time to look at cheap quad core smartphones, which are all powered by Mediatek MT6589 quad core Cortex A7 SoC, with prices starting at about $130 US. I’ll start by a short overview of Mediatek processor, followed by a few smartphones based on MT6589, starting with higher priced smartphones / phablets with bigger screens and more features to the cheapest ones.

Beside featuring four ARM Cortex-A7 cores, this SoC comes with an Imagination Technologies PowerVR Series5XT GPU, namely SGX544, an advanced multi-mode UMTS Rel. 8/HSPA+/TD-SCDMA modem and dual SIM support. On the multimedia side, it supports cameras up to 13MP, 1080p video playback and recording at 30fps, and LCD screens up to Full HD resolution (1920×1080). It is usually interface with MT6620 connectivity combo providing 802.11n Wi-Fi, BT4.0, GPS and FM radio.

A typical smartphone architecture based on MT6589 can be seen in the block diagram below (Source: hardwarebg.com). 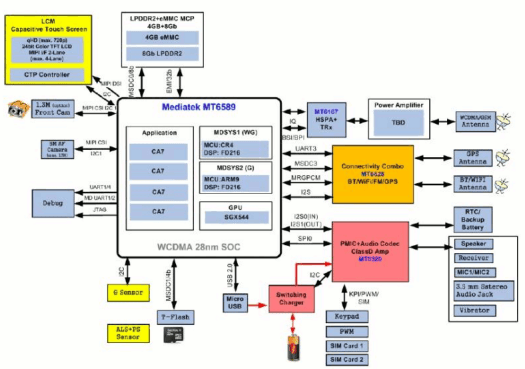 You’d probably not want this platform to tinker, since Mediatek is not exactly known to release GPL source code, although some of the customers may release (incomplete) GPL code.

Cubot A6589 sells for about $260 US on Pandawill, and for about the same on Aliexpress. 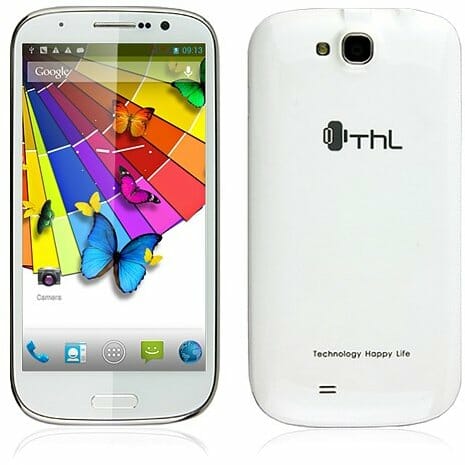 You can find this smartphone on most Chinese websites such as Pandawill, Deal Extreme, Aliexpress… from $230 US and up. You can also purchase this model on Amazon 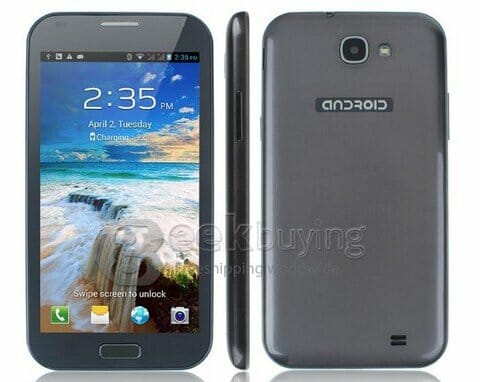 This Android 4.2.1 phone is available for pre-order for $160 on Geekbuying, and I could not find it available anywhere else.

And now the cheapest quad core phablet I could find, after filtering some dodgy results… This S3 clone based on MT6589 costs just about $135 from a somewhat reputable seller. The nameless device comes with 512 MB RAM, 4 GB flash, a 4.8″ display with 854×480 resolution, 2 cameras (1.2MP front / 8MP rear), and a 2,400 mAh battery capacity. [Update: This smartphone could be based on MTK6577, the Antutu screenshots points to this direction, and the URL contains MTK6577 instead of MTK6589 used in the title…]

$135 for a quad core phone – wow… (Seller rating’s a little on the low side though, no feedback = good feedback on Aliexpress!)

Re Tronsmart, isn’t it Geekbuying’s own brand? (eg did the Tronsmart Prometheus appear in other places with that name?)

@onebir
He got 139 feedbacks for this product. Not too bad, but it seem he sent the wrong color at least once, and one guy never received his phone, although the tracking code says otherwise.

Regarding Tronsmart, I can find Prometheus on Aliexpress, but since Geekbuying always seems to get their products first, is either their own brand, or they have a very close relationship with the company.

@Jean-Luc Aufranc (CNXSoft)
Ok but if you look at pages 13 & 14 on the feedback tab, you’ll see there’s no feedback from 14 customers. But the seller gets a default feedback rating of 4 stars. Maybe there are other default 4 star ratings in the earlier pages too.

For this seller it doesn’t matter much, but it can help bad sellers continue to make sales (eg until the -ve ratings overwhelm the default positives). I don’t think it’s a good policy…

Don’t forget about these cheapo fullhd smartphones, which gives a 5″ screen some justification.

@onebir > Maybe there are other default 4 star ratings in the earlier pages too.

Uhm, no? Every feedback of 5 stars, or 4 stars where the customer wrote something, is already a non-default one.
Why are you trying to find some suspicious problem when there’s none?
There are 12 pages of valid good feedback, but no, let’s get picky and only look at pages 13 and 14 where some people forgot to log in and leave feedback.

you have written “Micro Semi ATM7029” should be “Actions Semi …”

@rm
Sure, I just mean with a %age of each rating coming from default +ves, sometimes it’s best to be a bit careful interpreting the overall numbers. (This isn’t such a case, but sometimes a lot of the ratings are defaults.) If a seller is new, or their sales have expanded quickly, their overall rating could be biased by this factor too.

@sky770
Sorry, there are so many of those. I don’t follow the smartphone “market” that much. Thanks for the additions. 🙂

the price is very good, but I am worried about the battery life.

I’m planning to buy a quad core phone with a 5″ to 5.5″ display, at least 1GB RAM and 8GB flash, and ideally Bluetooth 4.0 LE (hardware) in case of firmware update to Android 4.3+, and Miracast support with a budget of around $200. So I guess it would be one of the Mediatek phones.

My dad got one of these about 5 months ago, and is generally very happy with it:
http://www.geekbuying.com/item/Tronsmart-TS4-MTK6589-Quad-Core-smart-phone-5-3inch-QHD-Screen-1GB-RAM-4GB-ROM-8-0-Camera-Android-4-2-1-OS-3G-GPS-With-Leather-Case-Gray-314798.html

But I think it was a bit cheaper when he bought it (preorder offer?); now for $20 more you get a similar THL…

@onebir
Thanks, I just went with ThL W200 as it’s a little better in terms of storage and resolution. It seems to be taking a little while to ship though (already 2 working days), so it could mean it’s out of stock.

@Jean-Luc Aufranc (CNXSoft)
I was too pessimistic. The order has just been shipped, they must be busy with Xmas orders.