Most set-top boxes running XBMC, are actually Android devices running XBMC as an app, and I don’t know of other media players that are sold with XBMC Linux pre-installed. Until today, as an XBMC Linux STB called The Little Black Box has been officially announced today. This XBMC device is powered by AMLogic AML8726-M3 @ 1 GHz, and comes with 1GB RAM, 4GB Flash, HDMI and AV output and more. 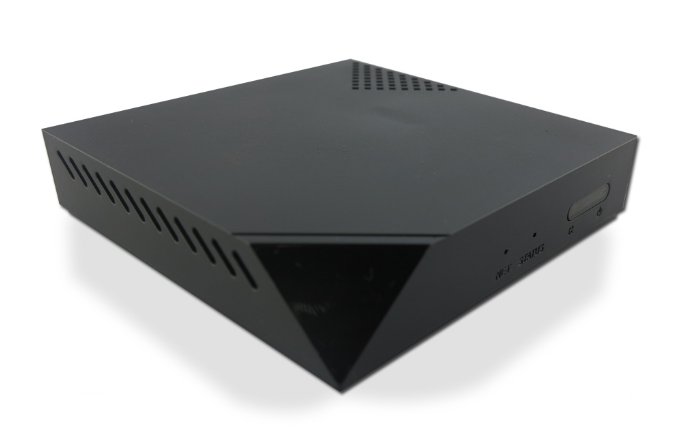 The package will come with the box, a dual sided RF remote  with a qwerty keyboard and standard remote buttons (pictured on the right), an HDMI cable, a power supply, and a quick start guide.

The device was initially scheduled for the 1st of May, but following some delays it should now be available at the end of May. It can be pre-ordered for 99.99 Euros including free shipping to Europe and US which is still reasonable considering you get an RF remote, and price includes VAT. Shipping to Asia, Thailand at least, costs about 30 Euros.

Correction: So as per Peter comment, there will be two versions TLBB, specific to this set-top box, and a community build. The source code of both version is available via github.

You watch watch the teaser video below.

Further information and link to pre-order are available on The Little Black Box site.

I am happy to answer any question or comments. This is the outcome of my earlier Indiegogo campaign. Would like to correct a little mistake; Both the TLBB and J1nx firmware are fully opensource and available for anybody who want to change, tweak or help out with the development. The TLBB version is actually a seperate branch on the j1nx github sources. Although they are based on the same sources, at a certain point the TLBB version will be kept stable, while the community build will have bleeding edge code, tweaks and features. Although I do think that at a… Read more »

If FULL source code is available, does that mean there’s source to the GPU and most importantly the VPU available as well?

Or only to parts of the kernel (sans GPU, sans VPU and what not) and userland (sans libgl(es) and sans ‘libVPU’).

Will this box be able to do DOLBY TrueHD and DTS HD passthrough ?

@Peter
Sorry about the confusion about the two version. Closing the source for TLBB would have been a GPL violation, I should have known better.

@oliver,
No only sources of the software used as received from Amlogic. The VPU is closed source, the kernel parts and libraries are included.

@yoda,
No trueHD/DTD HD, the normal versions are included.

@Jean-Luc Aufranc (CNXSoft),
No problem. Like you said it would have been a violation and destroys everything I stand for 😉

oliver :
If FULL source code is available, does that mean there’s source to the GPU and most importantly the VPU available as well?
Or only to parts of the kernel (sans GPU, sans VPU and what not) and userland (sans libgl(es) and sans ‘libVPU’).

Is it going to be upgradable to future XBMC versions?

Is it passively cooled (no fan)? Or is it fan cooled?

@Barusch, It is indeed out goal to extend the lifetime of this SoC by support. But if you mean that you can upgrade your XBMC yourself from main line then, no. Updates will be provided with firmware updates.

@Mikkel Frank, it is apssively cooled. No movable parts what so ever.

Will it be possible to run Netflix?

TLBB will ship very soon to those who pre-ordered, forums are up with some pictures of the device, and a link to the user’s manual. http://www.tlbbforum.com/forums/announcements/