We’ve had Ubuntu support on i.MX6 HDMI dongles, specifically HiApad Hi802 and Zealz GK802, for a little while,  but for those who prefer Debian distribution, a Debian installer is now available thanks to Angus Gratton. Bear in mind that 2D/3D GPU acceleration is disabled in order to save 192MB RAM, as this image is mainly destined to server and/or robotic applications. If you need a desktop experience with GPU acceleration, you’d have to use Ubuntu, or you may try enable it in Debian, and see if it works, but this has not been tested. 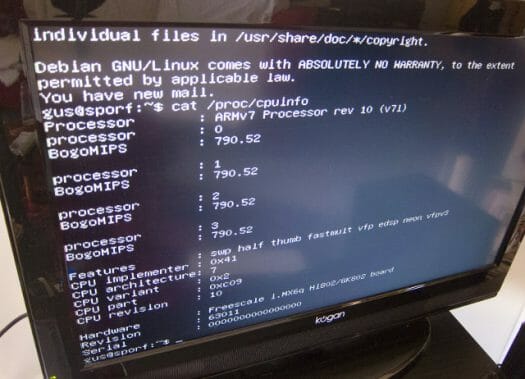 The instructions below are to be used with the internal microSD card, but if you’re ready to hack a bit around, it might be possible to run the installer from an external microSD or USB device thanks to Jasbir’s U-boot multiboot. You’d still need to use an internal microSD, but you’d only have to open the case once only, even if you change OS later on.

Let’s install the Debian installer to a microSD from a Linux PC:

Where [sd_card_device] is the device name of your SD card (e.g. sdc). Always use tools like lsblk or blkid to locate the proper device before using dd to avoid erasing data from your other USB mass storage devices.

You can also do this in a Windows PC via Win32DiskImager.

Now insert the microSD in the internal microSD slot of GK802, connect a keyboard, and power the device. You should be able to access the terminal via the HDMI display or the serial console. You’ll then be directed to install Debian to a microSD or a USB device. Using this method, if you install Debian to a USB drive, you’ll have to delete the installer partition in the microSD.

Angus decided to use an installer instead of simply providing a working image directly, because the steps to create the installer are (mostly) reproducible, and he uploaded the source code to gk802-debian-installer github repo.