Good news! I’ve just read Rockchip RK3188 Linux source code has just been released via Rikomagic, and Alok Sinha, the main maintainer of RK3066 source code, has already imported into github, and we should soon see a PicUntu image for RK3188 mini PCs. 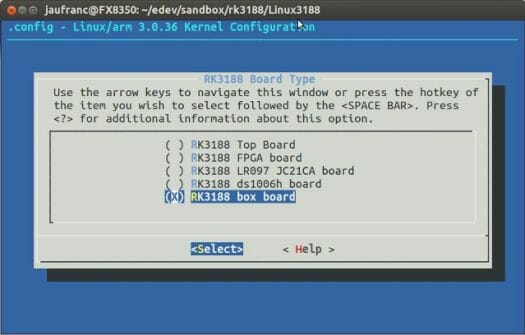 Let’s have a look:

[Update: you may have to run “sudo apt-get install libc6-i386” before running make_kernel_ruikemei.sh below, as mkkrnlimg is a 32-bit binary]

Usually, I immediately look into arch/arm/configs, but this time, there’s a “funny” script called make_kernel_ruikemei.sh, and .config already have some CONFIG_RK3188, so let’s run it:

After just over a minute, success!:

This kernel image is for Android only, and there’s a little work to modify it as a “pure” Linux kernel, so that it can be used to boot PicUnutu for RK3188.

The RK3168 boards (along with the latest for RK3066) are located in arch/arm/mach-rk30
I guess this is due to their also being a dual-core.

Which rk3118 device should I buy To get best community support ?

@qwiqooq
The source for RK3066 has been available for a while. The most active repo must be https://github.com/aloksinha2001/picuntu-3.0.8-alok

@tom
For Android support, check out http://www.armtvtech.com/armtvtechforum/viewforum.php?f=206 or http://www.freaktab.com/forumdisplay.php?134-RK3188-Devices. It seems now Tronmsart T428 is the device with most activity.

For Linux support, you may want to wait a bit, probably one of the device with Realtek Wi-Fi.

Yet, this is still working in progress, and AFAIK a Pictuntu RK3188 image has not been released yet.

@Martin Espinoza
You need to check the full log for errors. It’s possible one dependency is not installed.

I solved this problem following http://www.sysresccd.org/forums/viewtopic.php?f=25&t=3165&start=0

Hey guys, what went wrong, if the output is like that:

I have a Neo x7 and would like to compile a wheezy.

@thehid
Scroll up to find the error, or run “make”, not “make -jx” to see the error at the end.
You would better use Minix SDK instead of the code here, as their kernel will exactly match their hardware.

You should be able to use instructions adapted from to http://www.cnx-software.com/2014/01/27/getting-started-with-raxda-rock-how-to-generate-and-flash-ubuntu-saucy-server-and-desktop-images/ to run Debian Wheezy on Neo X7.

@thehid
So the build managed to complete….

Yes, the instructions for Radxa Rock and Neo X7 will be very similar because they both use RK3188, but you need to use the minix SDK (they’ve released it for the UI competition) to build the kernel (and boot.img), and the rest should be about the same.

I get this error at the end when I compile the kernel. Could you please update me.
SYSMAP .tmp_System.map
OBJCOPY arch/arm/boot/Image
Kernel: arch/arm/boot/Image is ready
/mkkrnlimg: cannot execute binary file
make: *** [kernel.img] Error 126

@dhruv
mkkrnimg cannot run… Are you building the kernel an x86/x86-64 machine or directly in a RK3188 development board ?
The instructions above are for cross-compiling in a Linux PC.