The Cubieboard with a 1GHz processor, 1GB RAM, a SATA port and its low price ($49) is probably one the best available options if you want to make your own ARM based NAS. The hardware is easy to get, most of the software components (Linux, SAMBA/NFS server, Bittorrent client, etc…) are available, but there are no NAS enclosure available for the Cubieboard, so this part may be a little tricky. Cubieforums user Vustus has a pretty neat and cost- effective solution for an enclosure based on off-the-shelf parts.

If you want to try it yourself, you’ll need the following parts:

The total cost (including shipping) is about $52 without Cubieboard nor hard drive. I think you’ll have a hard time finding a cheaper 3.5″ dual HDD enclosure if you live in the US, but you may be able to find cheaper cables, and adapter.

You’ll also need an Ethernet cable, a soldering kit, a power drill, an RJ45 crimp tool, as well as some screws and plugs.

The hard drive is fitted in the adapter plate, and the Cubieboard attached on top as shown below. 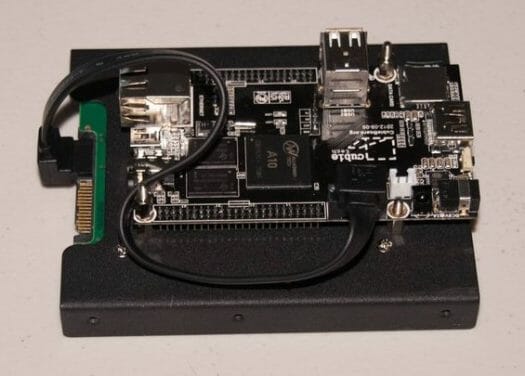 The you’ll need to drill holes in the enclosure, as well as cut and solder a few cables to complete the design. You can check the pictures and a few words of explanation on imgur.com.

The Cubies sata goes through usb so you’ll be limited with usb2.0 speeds.

@mongrol
To be honest I haven’t checked the details, but I’m pretty sure the Cubieboard does not suffer from “Raspberry Pitis” because SATA support is built in A10 SoC..

Does the Cubieboard still have a ‘low price’? You can get A10/A13 tablets for a similar price (shipped), and they have more components and cost quite a bit more to ship…

@onebir
It depends what you want to do. If you just want something to connect a monitor and USB keyboard and mouse, it may not be the cheapest option. If you want to do a NAS as above, I think it still a pretty good deal as it has a native SATA interface. For projects requiring GPIOs it’s also interesting although it competes with cheaper Raspberry Pi and Beaglebone Black boards.

and how it works in reality/everyday use? How it performs streaming hd videos? handling multiple users connected? anybody tested? Author maybe? 10q

I was looking for a solution for the upcoming cubietrack.

mongrol :
The Cubies sata goes through usb so you’ll be limited with usb2.0 speeds.

That is not correct.
The Cubieboard (well, the A10 SoC) has a SATA Controller.

Cubieboard does NOT have SATA connected through USB, I did test with 80Gb Intel SSD and here are results:

Having said all this, I should note that network was somewhat flaky while reading disk image from that SSD, so YMMV, but it’s definatly not USB speed.

There are no detailed info yet for the Allwinner A20 SoC to figure out whether it can support SATA port multipliers.
If someone has a Cubieboard2, then can verify by looking at the dmesg messages.

Better take a NSA-310 oder NSA-320. It is easy to install Debian and it has Gigabit!

Regarding port multiplier, I was looking at another model that from my limited knowledge should support any sata controller.
Please correct me if I’m wrong.

ARM is a hot ticket thanks to mobile but it is not always the best or most cost effective solution. For only slightly more money ($120+shipping) and a lot less headache, you can get a compact, complete, real Intel Atom PC with Gigabit LAN and dual SATA ports that would probably be more reliable and efficient for NAS application.

Of course, all the thrill of cobbling together a rickety, unstable, slow ARM based solution will sadly be missing.

mongrol :
The Cubies sata goes through usb so you’ll be limited with usb2.0 speeds.

This is just plain not true. The A10 SoC has native SATA and reaches 100+ MB/sec speeds.

How about getting 2x the Cubie “simple case”, & installing one sheet of the second one to make a “double-decker” case? Then the HDD could be go into a caddy screwed onto the second deck.

(Assuming the simple case is slightly bigger than a 2.5″ HDD…)

No it doesn’t dipshit. Why don’t you do some cursory reading before you embarrass yourself again?

I’m currently trying to implement a NAS using a cubieboard.

Cubieboard 2 and SATA 1 to 5 Port SATA2 Multiplier adapter riser card and A20-cubieboard Lubuntu Desktop Releases. Olny 1 hdd in linux. The rest of the disk is not visible to the system.
Other operating system?

I can’t really find a definitive answer about Cubieboard 2, except the SoC itself supports multiplier (SATA v2.6), but it’s not clear if the drivers do.
http://cubieboard.org/2013/09/14/cubietruck-is-put-into-trial-production/#comment-6062