About 10 days ago, Android 4.2.2 SDK for MK908 (RK3188) HDMI TV Stick was leaked, and now, I’m reporting another leak, this time for the Android 4.2.2 SDK for the Android TV Boxes based on the older Rockchip RK3066 dual core processor. The files were first found on an FTP server, but one of Freaktab members uploaded a compressed image of all files, RK3066_R-BOX.7z (3.2GB) to MEGA.co.nz.

The content of the SDK directory comes with a bit of documentation, AVC and VP8 encoding and decoding demos, and the SDK itself as a 3.2GB tar. I’ve haven’t download the file yet.

If you switch to the parent directory, you’ll find more documentation such as several datasheets and RK3066 technical reference manual, hardware files (Schematics, PCB layout, BoM), and some manufacturing files. 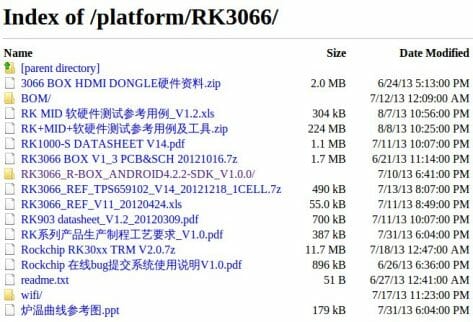 If you go up to the parent directory, you’ll also find an A20 directory with AllWinner A20 Android SDK (homlet sugar v1.0), but this is for another subject, and it may already be available.

Thanks to Morne for the info.

So we can have wifi ,bluetooth and HW accelerate in Picuntu Mk808B ?

I hope someone can upload it to Github and start making custom kernels for MK808B.

Does availability of these SDKs help with getting Linux working smoothly on these platforms? (Possibly stoopid qn 🙂 )

@onebir Heh, I get what you are asking for… 😉 There are few painful things that come inherently with these RockChip systems, two of the biggest ones are silly mess kernels that are are from ancient times (3.0.36), and the other is the lack of decent WiFi support for certain chipsets. Fortunately when somebody rebases the rk plat/mach crud into recent 3.10+ kernel, the WiFi chipset support would also come with it (i.e. the notorious AP6210 could be fixed with modded bcm4330 driver. And of course the RK901/RK903 (a’la MK808b as wanted above) would also be an “simple” port, if… Read more »

Two wrongs do not make right, but Rockchips deserve what they get. You can’t simply ignore GPL and then expect that your own proprietary license is honoured.

@MyName
@other_anon
I guess Rockchip does not care. They are in the business of selling chips, so I don’t think they care that much about the source or hardware files being released. For example Freescale released it all themselves: source code, documentation, and hardware files.

However, If the hardware reference designs and software have not fully been written internally by Rockchip, but they use some third party companies to do part the job, and those get income from the SDK license fees, then yes, these may lose out.

@anon
@other_anon
This is just for added confusion 🙂