A few months ago, we learned AMLogic was working on a Quad core Cortex A9 SoC with the new ARM Mali-450MP6 (8 cores) GPU called AML8726-M8. It turns out AML8726-M8 may not only be one processor, but a family of processors (M801, M802, M803, and M805) according to a recent article in Chinese. This SoC was going to be part of Geniatech ATV1800 Android STB, but specifications were not available. More details have now surfaced. 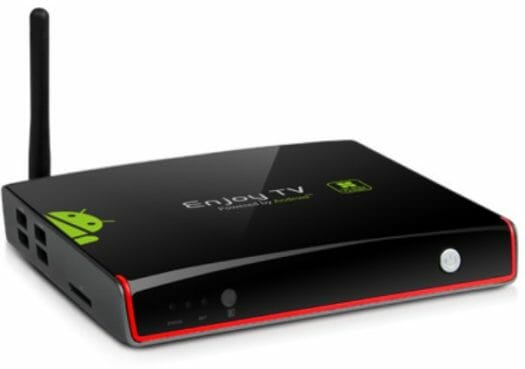 I’ve written these specifications based on several pages on Geniatech website, and the available pictures, so you should consider them preliminary, as there may be errors.

The company claims the device runs Android 4.3, the first STB I’ve personally seen with the latest version of Android Jelly Bean. There will also be a custom user’s interface, but you should also be able to access the standard Android UI, and Google Play will be installed. XBMC is also said to be supported. ATV1800 Enjoy TV will come with an HDMI cable, a user’s manual, a power adapter, and an IR remote control with 8 meter range. I’m not sure why they’d include an IR remote instead of a “fly mouse” with an high-end device, knowing how it’s difficult to use Android with a standard remote. 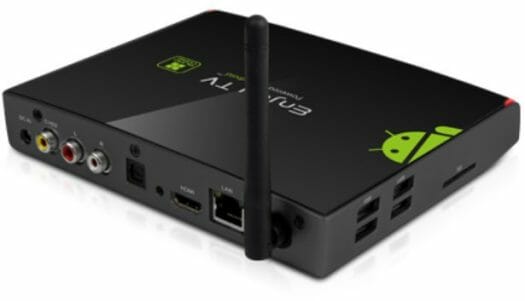 There’s no clear information about codec supported by the device, and they just list a few codecs and container formats (MPEG1/2/4, H.264, VC-1, WMV, AVI, MKV, MOV) on Geniatech ATV1800 page, but I’m sure there are more. The specifications list 1080p video decoding, but there’s also an UHD (2160p) logo which probably means the media player will be able to decode 2160p videos, but output up to 1080p.

I understand Geniatech is both a design house for AMLogic and a manufacturer (although actual manufacturing may be outsourced), and they sell devices under their own consumer brand, Mygica, and through partners such as Pivos. Inquiring mind may be able to find Mygica ATV1800 for $199.90 including shipping in Geniatech’s Aliexpress online store, but after contacting sales, they told me the device would only be available around the 20th of December, and the price will be lower.

As a side note, there’s also another STB called ATV580 Enjoy TV with a quad core processor, and quad core GPU (Mali-400). If there’s no typo in the GPU name, then it could strangely (Geniatech has only worked with AMLogic until now) be Rockchip RK3188, but if they meant Mali-450, it should be based on another AML8726-M8 processor either M803 or M805 both featuring a quad core ARM Mali-450 GPU.

And as another side note, some benchmark results have recently showed up on Padnews.cn where they tested a 9.7″ tablet prototype (AML M802 K100) with 2048 x 1536 resolution and based on M802 processor @ 1.9GHz. The device got 25050 in Antutu 4, which seems to be a pretty decent score, and comparable to what you get with Samsung Galaxy S4. 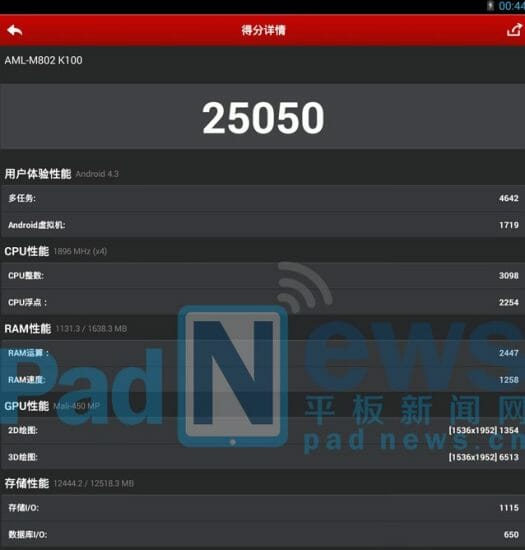 Other benchmarks such as Vellamo, Sunspider, and Nenamark2 2.4, also returned impressive results.

Update: You may also want to check out an interesting article on AndroidPC.es that compares AMLogic M802 3D performance vs Rockchip RK3188 SoC used in CX-919, and shows Mali-450MP6 to be about twice as fast as Mali-400MP4.

Good stuff looks like a decent performer. Pivos have said they have a box coming at the end of the year, it might be one of these or not maybe it might still be Amlogic but no longer Geniatech manufactured. There is also Google’s reported phasing out of Google TV in favour of Android TV which is based off 4.2 or later with a Google TV services process which is how Google maintains a degree of control just like with the Google Play Services process. OEM’s are left up to making their own UI and app developers make a TV… Read more »

This is old news. My inside source told me that matricom is going to have the amlogic quad core released before the end of the year with xbmc fully integrated. Looks like geniatech is going to be a little behind on this one.

but no detail if libstagefright is supported w/hw, it was a problem with previous mx chips…
I hope the new chip come w/roms open source and supporting standard omx, libstagefright… also the new mali450 is fastest but no word if lima driver work, so waiting for linux confirmation.
klein

Dev boards and hardware models are still in beta production. Should a device pop up geniatech will be the first followed by all the others will brand there ODM boxes as there own and spin out substandard firmware.

@MPAA
The salesperson told me $199 would not be the retail price, and that they’d sell it for a cheaper price. I don’t know why they’ve listed it if they can’t take orders, and it has been there for months…

Do you know if it is M801 or M802? I had to guess because the exact processor is not listed in the specs.

SOC cost and normal china model would have me to put my money on 801. $199 would think this is more of a MSRP. Only one tablet i have seen as demo 802 was by Skyworth and they are holding on public product till next year. Any m8 product that is going to pop up on the market from 11/13 to 3/14. I feel for the customer and for Amlogic reputation. This product line has the goods to get things done but Sample run of m8 soc just hit geni less then a month ago. The real test for this… Read more »

Another piece of unstable crap…
I don’t trust AMLogic processors…

@kenos
+1 To that, been bitten once too many times by them

it can run linux, i see from youtube https://www.youtube.com/watch?v=b6wORioJyZM