XBMCHUB (not affiliated with XBMC) reports that Geniatech has released the Android and Linux source code for ATV510B, one of Geniatech set-top boxes based on AML8726-M3 Cortex A9 processor.

ATV510B is the design used by devices such as Pivos XIOS DS, Jynxbox Android HD, Sumvision Cyclone Nano M3, and MyGica ATV510B Enjoy TV Nano 3, among others. Pivos has made U-boot, Linux and XBMC source code available in github for a little while now, but this new release is a pretty large file (2.39 GB) called xbmcandroid_com-ics-base-M3-20121212.tar.bz2 that includes Android 4.0 source including the kernel and the bootloader. This source code should work with “stvmc” hardware, as found in build.prop’s ro.product.name or ro.product.device keys. I haven’t looked into details, but here’s the content of the root directory of the archive: 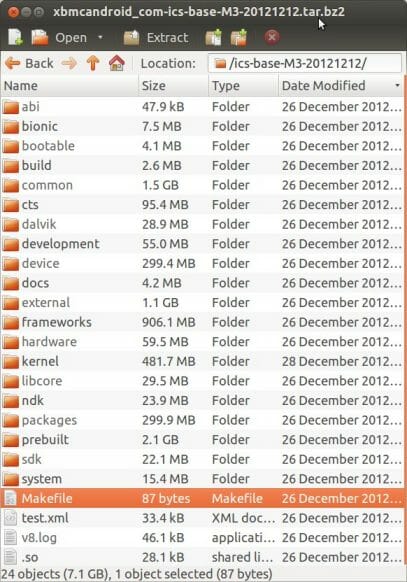 On a separate note, Geniatech also showed the picture below on their Facebook page, with 2 new Android TV Sticks: one based on AML8726-MX with MHL support called ATV130, and the other powered by AML8726-M8 quad core processor called ATV180.

ATV130 just looks like an improved design from ATV120, found in products like Droid Stick A2, but ATV180 is a completely new design with AMLogic quad core Cortex A9 processor @ 1.6 to 2.0 GHz, 2GB RAM, 2 to 32 GB Flash, Bluetooth and Wi-Fi. That’s all the public information there’s available for now. AMLogic is quite popular in set-top box form factors, but never really took off in mini PCs, we’ll see if these upcoming products can change that.

Can you put file somewhere else
as dropbox 🙂
Error (509)
This account’s public links are generating too much traffic and have been temporarily disabled!

@m][sko
Ah. If a few people starts to download a 2GB+ file on dropbox, it may happen… I could upload it somewhere, but since my maximum upload speed is 50 KB/s it would take a while…

We just updated the file download link to one hosted at MEGA:

Hope everyone enjoys this!