We’ve already seen several Bluetooth Low Energy (BLE) Arduino compatible boards being crowd-funded such as RFDuino and BLEDuino, but there’s now another board designed by Punch Through Design: LightbBlue Cortado. The board is programmed wirelessly directly via Bluetooth LE, instead of USB as in the two aforementioned boards, which means programming via iPad or Android tablets becomes more convenient. 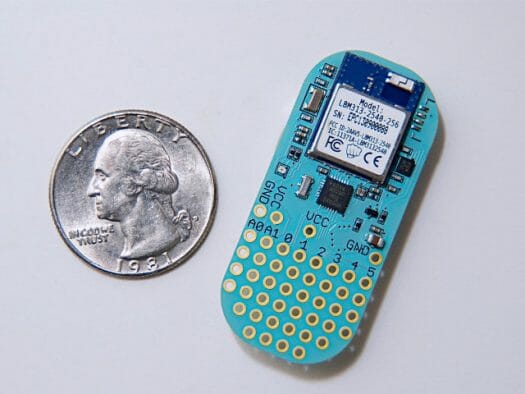 Here are the technical specifications of the board:

There’s no USB, so the only way to program the board is via Bluetooth LE. This can be done via a PC running Windows 8.1 or Mac OS X, or as mentioned in the introduction, via an iPad or Android (BLE capable) tablet. Programming will be even possible as soon as you receive the board, and you won’t even need to open the package…

Beside the IDE, the company will also provide another app called LightBlue, only available for iOS for now, that lets you test BLE devices, including the Cortado board.

The company plans to launch the product in May 2014, and is currently taking pre-order for, or more exactly crowdfunding, the board directly on their website. They’ve apparently chosen to increase the price every day (up to $24), and as I started to write this article it was $18, but it’s now $18.90, and will be $19.67 tomorrow. Getting four Cortado boards currently costs $75.60, and includes a free Maker kit with BLE sensors,headers, buttons, and resistors. This is a “take your money first” type of funding, as your credit card will be charged immediately. Shipping is $4 for the US, and $8 for international orders.

I’ll conclude with a side note. When you spend your money in crowd-funding projects, there’s never a 100% guarantee you’ll get what was promised in the pledge. You are a bit like an angel investor who takes a risk while funding a start-up. I’ve just heard people have lost money on Coolship keyboard, which was successfully funded via Indiegogo. Although development seemed near complete at the time of the campaign, the product never shipped, the company website is gone, and so is the Indiegogo campaign page. That means people who pledge will never get the product they “ordered”, nor their money back. Punch Through has apparently made iPhone and iPad accessories for a few years, so the risk of failure is probably low.

Very nice board, 1 year uptime and BT will be great for some projects. Size is huge winner here..

Myself I`m looking at Carambola 2 since I want something wi-fi based http://shop.8devices.com/carambola2