pcDuino is a new development board based on AllWinner A10 Cortex A8 SoC that comes with 1GB RAM and 2GB NAND Flash, HDMI output, as well as USB and Ethernet RJ45 ports, and is said to feature 2.54mm pin headers compatible with Arduino boards. 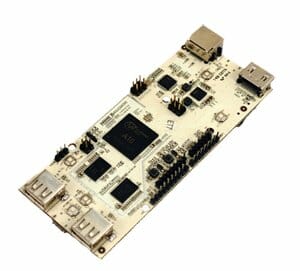 Here are the pcDuino specifications:

The board comes preloaded with Ubuntu 12.10, but it also supports Android 4.0 ICS. The “Arduino compatible header” allow you to connect any Arduino shield to pcDuino, and pcDuino developers have written C code to allow programming the I/O like an Arduino.

The company provides Ubuntu and Android images, tools (liveSuite/Phoenix card), a user guide, and some hardware files for the board: mechanical drawings (PDF and DXF) and schematics (PDF). In their user manual, they compare pcDuino to the Raspberry Pi, but it’s actually much closer to the Cubieboard, albeit with less exposed I/O pins.

The board is available now, and can be purchased for $59 + decent shipping fees to the US, and exorbitant ones to anywhere else. [Update: Worldwide free shipping is available from ezMCU]. [Update 2: Surprisingly it’s also available on DealExtreme for $64.50 inc. shipping]

Thanks to David for the news.

why in some places is it written “DRAM 1GB” and in the others “DRAM 256MB” (even on the same webpaga – like the page u mentioned ezMCU)? Are there two versions?

@renw0rp
I guess not. I’ve never seen 256MB on AllWinner devices. I guess they just copied some specs from another website, and forgot to update that. It would still be wise to check with the sellers before buying.

But no SATA. And still no Cubieboards for sale 🙁

Here you can find cubieboard:
http://www.aliexpress.com/store/product/cubieboard-1GB-ARM-Cortex-A8-Allwinner-A10-simple-board-free-shipping/211096_731467029.html

PcDuino is now also available on DealExtreme for $64.50 inc. shipping.

This is what came to mind when the UDOO was announced http://www.kickstarter.com/projects/435742530/udoo-android-linux-arduino-in-a-tiny-single-board/posts/456046

I was thinking, “Haven’t I seen that one elsewhere before?”

They are NOT the same [ freescale iMX6 vs Allwinner A10 amongst other things ] but the idea of marrying a micro-controller to a CPU on a board is not new.

The more the competition, the better

@eebrah
There’s no MCU on pcDuino, the GPIOs are directly handled by A10. So the only thing in common are Arduino compatible headers.