We were expecting some new processors at CES 2014, but this CES turned out to be mostly disappointing, and the vast majority of reporters present at the conference, do not seem interested in covering Chinese SoC vendors. Some information however surfaced on several foreign languages blogs and news sites about Rockchip RK3288. First, RK3288 is indeed based on ARM Cortex A12 as initially announced, and not some mysterious ARM Cortex A17 cores, but somebody at Rockchip likely made an embarrassing mistake, and Edward Weinert reported it was corrected at Rockchip booth with  pieces of paper as shown below. 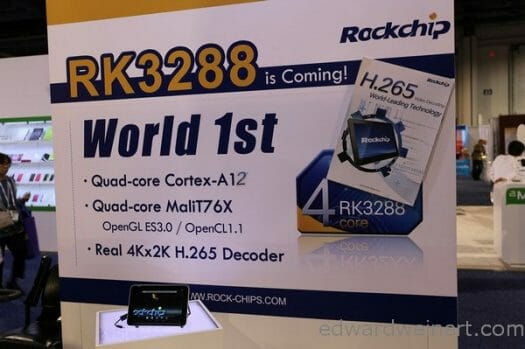 The first column is probably AMLogic M802 with Mali-450MP6. If you upgrade from RK3188 to RK3288, you’ll get 4 to nearly 6 times more 3D graphics performance based on GFXBench benchmarks. The company did not include the CPU performance, as Snapdragon 800 will clearly have an edge in this area.

We’ll have to get more benchmark results to get a complete picture of the performance, but we already know CPU performance should be pretty decent, and GPU performance be top of the class.

RK3288 is said to cost about $40 for now, with the price probably coming down to $35 in the second quarter. One of the first devices with RK3288 SoC will be allegedly be Yuandao M12 tablet.

@Harley
“Real 4Kx2K H.265 Decoder”. So it would be highly misleading if it was not done by the VPU.
4K2K HEVC decoding is simply impossible with the CPU only, and probably challenging (impossible?) with GPU compute.

@Jean-Luc Aufranc (CNXSoft)
I would think 4K HEVC decoding via OpenCL would be well within the capability of a Mali T760 series GPU. 4K HEVC encoding too, possibly. But using the VPU to do it instead is probably considerably more power efficient though.

So where’s the Allwinner A80 that was supposed to be announced at CES 2014 ? I find that one much more interesting than this Rockchip and we still don’t know what GPU it will use.
Whatever GPU the A80 will use I prefer raw CPU power to GPU power and the A80 will pretty much blow other Chinese SOCs out of the water when it comes to CPU power.

@anonymous
Yes, it appears you are correct. “Mali acceleration opens up the possibility of 1080p @ 60 fps and 4K x 2K @ 30 fps HEVC decode on mobile devices without dedicated HW”.

@Marius
No sources in English, so I’ve checked recent articles on Chinese sites, but they only talk about the A80 board, nothing about the GPU yet, nor pricing.

@Marius
Sorry, the GPU is PowerVR.

I suppose there is a mistake on GPU too. That was first announced with a Mali-T624, and on the erroneous annouce with an inexistant Mali-T764. Now That’s a Mali-T76x ??? instead of a mali-T760 in the Mali-T7xx serie ???

I suppose, as first announced, this summer, the GPU is instead a Mali-T624, does someone have the answer ?

I do own 2 rock chip device rk3188 and one allwinner A31 and so far better graphics gpu ,brightness, sharpness, contrast.

@Noloqoq
Damn, I should have checked this too. Based on the 300Mtri/s, it can’t be Mali-T7xx either, so it must just be Mali-T624 instead, as they said the very first time. What did they smoke or drink when they prepared this?

I spoke to the head technical guy at the Rockchip CES 2014 booth for a good 10 minutes on Thursday. While there was a bit of a language barrier at first, it was clear he expects Rockchip’s new quad core ARM SoC to outperform expectations.. He was very excited about the RK3288 chip which he says will be available in small quantities around the first of February 2014. I asked him for his best estimate of the increase in “real world” Android tablet performance one could expect if one replaced an RK3188 chip directly with an RK3288. He seemed pretty… Read more »

@Jean-Luc Aufranc (CNXSoft)
Haha, I’ve seen this before with Chinese companies, they’re not very sure about what they’re making 😀 Kinda makes you wonder how they actually manage to get products out.
I think the main thing here is that they don’t really put technical people in charge of this, it’s the marketing folks and stuff and most of the time they have no idea what a GPU is.

Who cares about RK3288 if there is no stable Linux kernel?

@Jean-Luc Aufranc (CNXSoft)
Yeah … fail but I’ll forgive them is they put a SATA port on it. And that fex thing of theirs is just great … you don’t need the binary kernel for that perticular gadget so it’s still better than Rockchip and the other unless they go the device tree way.
Having a tablet and just putting in the Alwinner kernel and booting is more than you can expect from ARM hardware these days… kinda makes it feel like X86 🙂

cnxsoft :
@Noloqoq
Damn, I should have checked this too. Based on the 300Mtri/s, it can’t be Mali-T7xx either, so it must just be Mali-T624 instead, as they said the very first time. What did they smoke or drink when they prepared this?

Someone probably did it deliberately. Its common in China. IT would look “good” during chinese trade show – better numbers than competition. Here in English speaking world it just makes them look incompetent and retarded liars.

@rasz_pl
You are right. It is all too common within the industry in China to overstate or even flat out lie about specs on upcoming or even released products. There seems to be an attitude that “everyone else” is doing it, so we don’t want to look bad in comparison.

Rafael duarte :
Allwinner I like that idea to keep working closely with imagination technology

Well at least I would hope that Allwinner and others using IM GPUs would try to pressure them to open up their drivers more, preferably to open source, but at least more compatible licenses and better frequent linux support.

Harley : Rafael duarte : Allwinner I like that idea to keep working closely with imagination technology I actually hope that Allwinner stops using PowerVR as they are infamous for using closed source drivers and slow with closed source driver updated on Linux. Well at least I would hope that Allwinner and others using IM GPUs would try to pressure them to open up their drivers more, preferably to open source, but at least more compatible licenses and better frequent linux support. Pretty hard to believe Allwinner would pressure someone else to release open source software when they’re not too… Read more »

@rasz_pl Totaly agree, that’s like american companies like Intel that say their CPU only consume 10W (as mean value) and compare this to a whole system that consume 5W at TDP, or nvidia that say they created new technology for screen refresh rate, where all the other do the same, or Broadcomm that say they finnaly give full opensource driver for raspberry pi (and rasb pi that repeat, where most important things is kept closed ;). Go to your bank, you will probably have offer for « Really interesting » services too… Everyone in commerce lie (if at least commercial… Read more »

I’ve spent quite a bit of time with the RK3188 via my Minix Neo X7. I’ve ran this system on Android 4.2, Ubuntu 12.04-ARM, and PicUntu-4.5. Android has ran the best, likely due to the GPU drivers having hardware acceleration. I currently keep the Finless 1.7 firmware installed and it’s working very well overall. Ubuntu 12.04-ARM worked pretty well overall, though the lack of accelerated GPU drivers was a deal breaker, because I *can* get full 3D with Ubuntu on an x86 system, such as my Zotac ZboxHD-ID41-Plus. Outside of this one major issue, Ubuntu otherwise ran very well and… Read more »

@Galll0s
I wrote the timeline somewhere in a comment. But I’m now pretty sure it’s ARM Cortex A17.

@Harley
Yes, it is full hardware decoding.
I have one of this 3288 chip; and 4K/HEVC video does not make him warm while playing.