We’ve now got plenty of low cost and low power ARM based boards and devices, but Intel is not sitting by idly, and in recent years they’ve worked to greatly reduce the power consumption of some of their processors, and relatively low power, cost effective Intel based motherboards will be available later this year. For example, MSI J1800i will be based on Intel Celeron J1800 dual core Bay Trail processor with 10W TDP, 64-bit support, and cost around $60 when it becomes available end of January or in February. 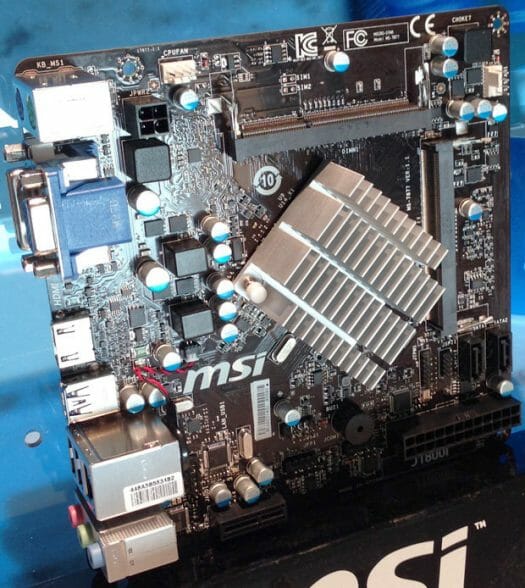 Here are some of the specifications of this motherboard:

The “recommended customer price” for Celeron J1800 processor is $72.00 on Intel website. I’m not sure if this is just for the “boxed version”, but it seems difficult to make a $60 motherboard with a $72 CPU, unless they talked about volume pricing. We’ll have to see. You’ll need to add memory (4GB SO-DIMM DDR3 is about $40 now), and potentially a SATA HDD or SSD to get the full price for comparison to ARM platforms. There will also be a quad core version for $70, probably based on Celeron J1850 (10W TDP).

The benchmark results below give an ideas of Intel process in terms of power consumption, by showing a Celeron J1850 (10W TDP) launched at the end of 2013 has about the same CPU performance as an Intel Core2 Duo E8200 processor (65 TDP) launched in 2008. 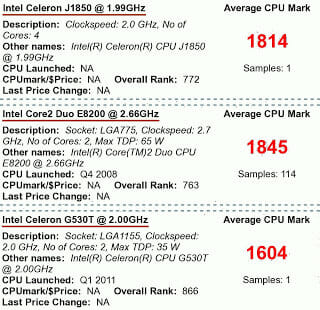 As a comparison, an ARM Linux or Android computer will typically consume 2.5W to 10W (possibly 15W for Cortex A15). That’s the whole board, and the motherboard above will consume more than 10W once you add all components, but the gap is narrowing.

Someone please build one with 6 Sata, I want to upgrade the lowly AMD C60 in my NAS…

I would definitely prefer these to ARM for media PC, BTW (even if they need a bit more power). Finally no ARM weirdness and actually working drivers (unlike RK and Allwinner) for all major OSes. Then again, I already have a core I3 NUC so not sure if I will bother upgrading that (though less heat would be welcome)…

Now I need to rethink my plans for new XBMC box and small NAS/torrent/XDCC box… this looks indeed nice.

Yes, if the final retail price is this it will be competitive.
Really you don’t need a HD, you can use a SD card and USB card reader for less than $5, and you get a running system.
(but no wi-fi)

But how much is the performance difference to a IMX6q ?
Because, for a complete x86 motherboard with CPU, I think it is cheap.
And probably it is plug and play and not the nightmare of some ARM boards.

By the way, gigabit network ?

This is an 22nm Atom mainboard with a dual core (Silvermont) CPU. http://ark.intel.com/products/78866/Intel-Celeron-Processor-J1800-1M-Cache-up-to-2_58-GHz There are two SATA ports and since there is a PCI-E (1x) slot, you could add a SATA controller card if you need 4 more SATA ports. There is also a GB Ethernet port. http://www.msi.com/product/mb/J1800I-.html#/?div=Basic As for WiFi and Bluetooth, there are a number of inexpensive miniature USB adapters that one could use. The main advantage of this sort of mainboard compared to the various ARM TV box solutions is the Linux compatibility: this is an x86/64-bit CPU with an Ivy Bridge based GPU (Intel HD graphics).… Read more »

@Jean-Luc Aufranc (CNXSoft)
Ops, I didn’t checked the original site and it was not clear from the list. Good news!

Andrew :
b) Android compatibility. ARM is still the way to go for running Android.

Who needs Android when you can have full Linux support??

3 questions:
1) do the board need a fan for the cpu? (hope not)
2) is the Cpu swappable?
3) can one use a Power Supply without fan, or with the fan disabled?

@panicopticon
Oops, I looked for it, but somehow failed to find it when I wrote the article. Thanks!

@JotaMG
1) As I understand it, no fan is needed.
2) CPU is soldered on the board.
3) Probably yes, with something like http://www.e-itx.com/mini-box-m350.html

It looks like a great replacement for my aging amd e-350 box.

How about this one. you might as well pay the extra $10 and get two more cores

wow look at this guys

if so i might buy it. it’s around $160 although i dont know how much a block would cost for my gigabyte 650 ti boost it would be if i can cool two thing with one pump also the fans dont work on my gpu

J1800 includes both CPU and GPU, but I probably an external chipset for I/O. Not 100% sure. I’d assume the Tegra K1 would cost something in the same price range.

@Jean-Luc Aufranc (CNXSoft)
I’m not very clear about the requested quantities for the prices above. I think ARM SoC are priced in volume, but J1800 is probably priced per unit at $72, since MSI can allegedly make a $60 motherboard with that very processor.

Seeing that the 4 core and the 2 core Bay Trail D both have a TDP of 10W, i would seriously expect the 2 core to draw less than 6-7W under full load. Of course the South Bridge and the ram will still draw some, on top of that. So it’s not quite ARM territory yet but it’s also much faster.

Thinking of it, I might be better off buying an Akasa Newton case for my existing Core i3 NUC and finally silence that bugger (it very much eludes me why it got good ratings on noise online)…

The price seems quite good @ $55.99 on http://www.directron.com/j1800nh.html. Never heard of directron before though.

@Jean-Luc Aufranc (CNXSoft)
I wouldn’t be surprised if #4 meant no *mSATA* port. That would make a lot more sense.

@Smeghead
Could be, or it might just be because I wrote “Serial ATA” instead of “SATA”, and a quick search for “SATA” did not show up anything in the list…

So Mobo is $70 plus $40 for memory plus $40 for case plus $40 for power supply gives $190 versus a complete ARM Quad Core mini pc at $60. So almost 3x price of quad core ARM which is a reasonably fast system. Curious how the performance would compare between the two.

@mike
It will have vastly better software support than any of the cheap androids, for damn sure.

@mike The processor should be much faster, even the dual core versin, and you’ve got some nice interface like SATA, Ethernet, USB 3.0, mini PCIe, VGA and Displayport Output that you would not find on $60 quad core ARM mini PCs. Software support should be much better too, as mentioned by @Someone from the other side , especially if you want to run Linux (instead of Android). You’ll also need to add a mass storage device with an OS to boot the x86 system. But it can be a simple USB flash drive, if you don’t need an hard drive.… Read more »

One more motherboard this time by ASUS – http://www.fanlesstech.com/2014/03/asus-debuts-value-bay-trail-motherboard.html

Hi, I wanna know if my j1800 Intel core 2 dual can be upgraded to a Intel quad core GPU I just wanted to know since my PC is not able to run my programs, and it is soldered but I wanna know if it can be solder removed and cleanly be replaced with the necessary tools you may provide me with your knowledgeable help to me. Thank you in advance. I just wanna get the Lil square GPU into my reliable PC. Please inform me!