I usually spend most of my time writing about low cost hardware in this blog, but in this post, I’ll deal with higher-end and more expensive devices based on Freescale i.MX6 with Cornfed CONSERVER Server System and corresponding CONSERVER motherboard, as well as Ventana Network Processing Boards. 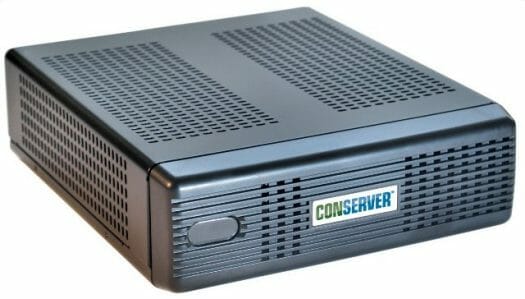 The hardware specifications are as follows:

The system is preloaded with Ubuntu, and can be customized with wireless connectivity, or DC power supply, and mounted via DIN rail or Vesa mounting system.

You may think “This is the system I’ve been waiting for!”, until you actually have to pay the bill, as CONSERVER server system costs $649. If you only need the motherboard, you can get it for $449. There’s also just a 30-day warranty… [Update: The price has been lowered to $579 for a full system with 4 GB DDR3 and a 1 TB 7200 RPM hard drive, the motherboard is now available for $349 with power supply, and warranty has been extended to 60 days]. Further information is available at cornfedservers.com

Ventana network processing boards by Gateworks Corp are a bit different as they offer one or more Gigabit Ethernet ports, mini PCie slots, and they are industrial grade boards. All the six SBC computers for network processing are based on Freescale i.MX6 processors, but the low-end model starts with a dual-core processor @ 800MHz with one mini-PCIe slot, and the best performing model features a quad-core processor @ 1GHz board with 6 mini-PCIe slots, and high definition video support.

The six boards can be differentiated as follows:

The company provides OpenWrt and OpenEmbedded Linux Board Support Packages (BSP) for the boards.

If you feel you don’t have enough ports such as mini-PCIe slots or Ethernet ports, the company provides the following expansion modules:

The most annoying thing about these ARM devices companies is their refusal to provide prices… That pisses me off and makes me give up buying whatever they are trying to sell.

Always read, errata first. Our friends at Freescale describe a “minor” problem with Gbit Eth : Description: The theoretical maximum performance of 1 Gbps ENET is limited to 470 Mbps (total for Tx and Rx). The actual measured performance in optimized environment is up to 400 Mbps. Projected Impact: Minor. Limitation of ENET throughput to around 400 Mbps. ENET remains fully compatible to 1Gb standard in terms of protocol and physical signaling. If you intend to use an IMX6 for server loads, you’d better put a Gb Ethernet chip on the PCIe and use the internal Gb Eth for management.… Read more »

That 35W PSU in the Conserver looks insane compared with the “wall warts” we can power most ARM-based boards with currently. I wonder who their target audience is?

I’m also going to be very interested in whether we start seeing quad- and octo-core chips with a less powerful GPU that’s more targeted for building server class systems rather than tablets and phones.

There are an user, Shonk, from NAS-Central Forums, he gets 90MB/s with your ls-xhl and a modded stock firmware.

And with my wandboard quad, I only got 30MB/s and it is not stable. Sometimes I am stuck at 22MB/s.

@Leo
Well, 30MB or 22MB is in line with the limited bandwidth available for the Gb controller on internal bus. There is no way you can use a IMX6 in a NAS setup without an external Gb Ethernet controller.

For a really cheap NAS, I’m eager to test an Allwinner A20 with Gb ethernet. Wonder if Allwinner did a better job than Freescale 🙂

@Frederir
That errata is a generic one against all Cortex A9 processors, not just Freescale. ARM recommended hooking the Gb PHY to a slower bus that actually is the limitation.

@Narakorn Songkittirote Ludlam
The target market is servers. These can be in data centers or as esoteric locations as industrial and military applications. This product was designed as a system rather than just a board. Thus the case, the internal PS, etc. The 35W PS is actually way overkill, future versions may be downsized to a 25 W supply. The CPU only draws about 5W but the disk and memory etc bump up the total system power. The original design was very conservative.

@Patola
We agree, thus we provided pricing on our web pages. The $650 price tag is quite competitive when compared to entry level server from Dell etc. This product is not designed to compete with hobby boards like the Raspberry Pi, et. al. Its much more powerful. That plus the fact that its a system level design makes it more expensive.

@Frank Miller
I could not find the temperature range on your website. If your server supports industrial grade temperature range (-40 to 85? degree Celsius), and even military grade (not sure of the range here) then that may justify the higher price.

@Jean-Luc Aufranc (CNXSoft)
The design can be upgraded to higher temperature ranges. The initial product is commercial grade.

@Frank Miller
You are joking, right ?
You are telling that all Cortex A9 based soc do not have a proper Gb Ethernet ?

@Frederir
That’s my understanding from what I was told by Freescale. And I misspoke. ARM recommended connecting the Eth MAC (not the PHY) to a slower internal bus that causes the bottleneck. As I understand it, any vendor (which I think is all of them although I don’t know for sure) that followed that recommendation will have the same issue limiting the overall bandwidth. However, the interface still connects to 1Gb ports properly, its just limited in bandwidth and 480 Mbps is certainly a lot better than the next stop down which is 100 Mbps.

@Frank Miller I understand very well the difference between wire rate and data rate. But using an IMX6 for server load with a Gb Ethernet which has a maximum data rate of 400Mbps (for both TX and RX!!!) is not very wise. Sure it’s better than 100Mbps Eth but it’s only two times better (a 100Mb eth is full duplex so it has 200Mbps total bandwidth). In order to propose a real server based on i.MX6 you should have put an external Gb eth on the PCIe. Anyway, if someone has a Cubietruck or another board based on Allwinner A20… Read more »

We have updated our pricing. Please visit our website for more details http://www.cornfedservers.com

Gateworks has added an additional ethernet port off the PCI bridge to achieve much higher throughput numbers than the Freescale port. You can read more about it here: http://trac.gateworks.com/wiki/ventana/ethernet . Gateworks boards are priced very competitively, feel free to email / call anytime for a price quote and to learn about our Easy Customization. All of our boards are very rugged and come standard with Industrial Temperature rated parts from -40 to +85C. We can produce a commercial temperature grade as well that would be lower cost.