The Raspberry Pi just a great low cost ARM Linux board that costs $25 (Model A) to $35 (Model B), but once you start to add accessories the total cost of ownership may creep up quickly, and in some cases accessories may be more expensive than the board itself. I’ll list some alternative accessories that can be purchased online for a fraction of the cost of the more famous one. 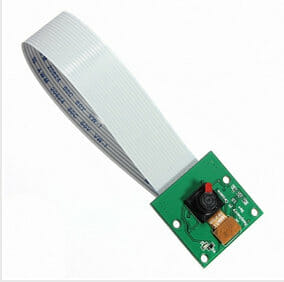 The official Raspberry Pi camera costs $25 + shipping and tax, but you can get a similar 5MP CSI camera for just $18.13 including shipping on Banggood.com. This camera clone should be software compatible with the original one according to the listed features:

It appears to have similar specifications as the original camera up to to sensor, so I’d guess the image quality should just be the same, but this would probably have to be tested and and compared it to the original R-Pi camera. The Raspberry Pi foundation is most likely getting some funds from your purchase via RS components or Farnell as well, which is not the case with the clone.

The Raspberry Pi comes with a full sized SD card slot, and when you insert the SD card in the board over half of the card is outside the board, which is not always looking nice, and in some applications may be an issue due to lack of space. To solve this problem, there are a few microSD card adapters from Adafruit ($6) and Pimoroni (about $10) among others, but you could save quite a lot by purchasing a microSD card adapter with the same functionality for $1.62 including shipping from BuyinCoins. 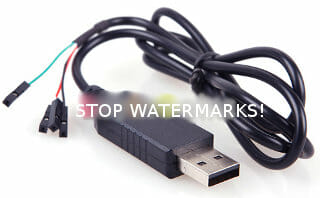 If you want to see what’s going on at boot time in the bootloader and the linux kernel, you need to connect a USB to TTL to the UART pins of your Raspberry Pi in order to get the boot log in putty, minicom (Linux) or hyperterminal (Windows). Adafruit sells one for $9.95, but you can also buy a cheaper one which should work just as well [Update: the previous product uses +5V, so using another one supporting +3.3V won’t damaged the R-Pi, and is even cheaper: $1.45]

The Raspberry Pi should not need heat sinks, but if your board is an environment where proper ventilation is not possible, and/or you overclock your Raspberry Pi to 1GHz or more, hits may be useful, a heat sink kits with 3 heat sinks for Broadcom BCM2835 SoC, LAN9512 Ethernet chip, and the voltage regulator are sold, and made of different materials such as ABS, aluminum and copper. Banggood is probably selling one of the cheapest aluminum kit for $1.26 including shipping. If you want a copper heatsink just for the SoC, there’s one for $1.19.

Pimoroni Pibow case is one of the most commonly used case for the Raspberry Pi, and it looks very nice, but costs a little over $20. There are many cases for a cheaper price, but this transparent Raspberry Pi case may be one of the cheapest ones for $3.52 including shipping.

Do you know any other cheap accessories for the Raspberry Pi? If so, let us know in the comments.

Thanks to onebir for the links.

Re the USB To TTL cable, be warned that the RasPi DOESN’T have 5v-tolerant GPIO ! You _must_ adapt the TxD line of the cable to 3v3 (with a resistive divider for example), or use another cable with 3v3 IOs. The RxD line is usually able to use 3v3 signals.

@Laurent
Thanks! I missed that important detail. I’ve replaced the USB to TTL board in the original post with a 3.3V one: http://www.buyincoins.com/item/12183.html

@Laurent Thanks for pointing that out! Both $10 & $2 models use a PL-2303HX chip (eg from Adafruit’s page: “install the Windows XP/Vista/7 or MacOS X PL2303HX.A drivers on your computer”) & the pictures of the two models look identical. Perhaps someone could comment whether the two might have internal differences making them incompatible?

Great article. But the cheap transparent case is crap. You will never get the pi out and back in without breaking the case. However there are other non transparent cheap case which should work fine.

@onebir : Actually, I think it only depends on the voltage applied to pin 4 of the PL2303 (check its datasheet). A simple switch could make it compatible with 5v or 3v3 on-demand, but AFAIK such device doesn’t exist (yet).

Also beware of cheap usb-serial adapters that use the PL2303 as chinese copy of this chip won’t work with the proper prolific drivers… so if you have one that doesn’t play nice with the drivers, there you go !

@dekswizard My ~$2 hub seems to work fine with Linux. I haven’t tried to test it though…