Before micro-controllers or processors are manufactured, simulation is performed in (usually) expensive boards based on FPGA chips from Altera or Xilinx, and once designers have found the system to work as expected, they can move to the next phase and work on the actual silicon. ARM has just released V2M-MPS2 Cortex-M Prototyping System for MCU / SoC / ASIC designers working on Cortex-M processors. 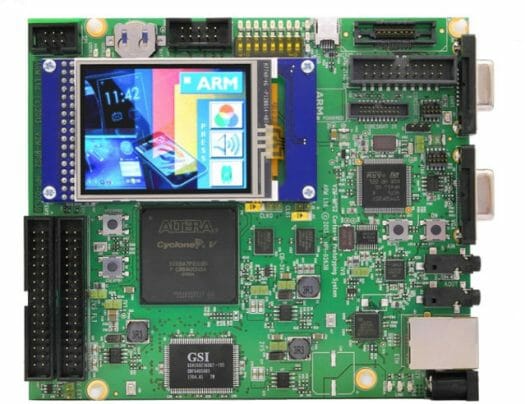 A micro SD card is used to store FPGA and program images, as well as configuration text file.  When the board is powered up, an STM32 MCU automatically programs the images to the FPGA and memory automatically. If you connect the board with a computer via USB, you can download and/or modify th images files and configuration as if it was a mass storage device. The platform can emulate Cortex M0+, M0, M1, M3 and M4 cores.

The board includes an example project based on ARM Cortex-M0 DesignStart, which allows designers, students and researchers to try ARM Cortex M0 IP. The example project also comes with a subset of ARM’s Cortex-M System Design Kit (CMSDK).

Further information is available on ARM’s Cortex-M Prototyping System page, and if you are going to attend Embedded World 2014, in Nuremberg, Germany, you can learn more with a 30-minute presentation called “Cortex-M processor based system prototyping on FPGA” taking place on the 25th of February.

@Ian Tester
Oops, how did that happen?

@mpiu
What is the problem with VGA? It’s a platform to emulate Cortex-M MCUs.

@Jean-Luc Aufranc (CNXSoft)
Oh, ok, I tought it was finally a competitor for Zynq platform (which offers a real processor and DVI for about that price), instead it’s an SDK for SoC prototyping…. sorry