A few months ago, AMD published a roadmap showing AMD “Seattle” Server CPUs based on ARMv8 64-bit architecture were planned for H2 Q2014. The company has now announced the first series of processors that will be based on ARM Cortex A57: AMD Opteron A1100 Series, as well as the corresponding development platform at the Open Compute Project Summit in San Jose, California. 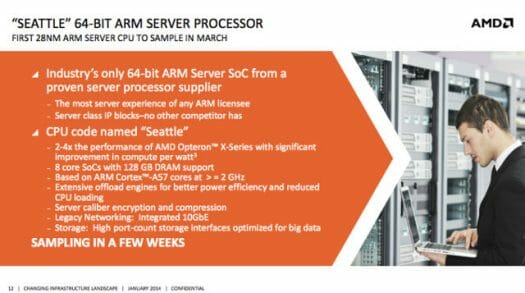 On the software side, the company mentionned it is a member of the Linux Foundation and Linaro, and that several operating systems vendors including Canonical, Red Hat and SUSE are committed to support ARMv8, and virtualization will be enabled through KVM and Xen. You’ll be able to program in Java via Orable OpenJDK, as well as Perl, PHP, Python and Ruby. The GNU C compiler and corresponding C Library have already been ported to the 64-bit ARM architecture. 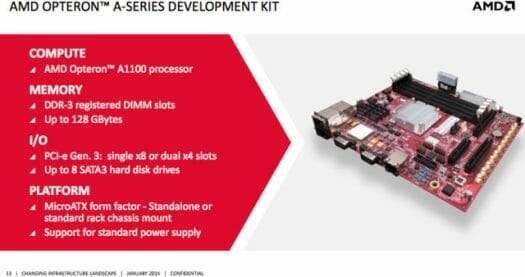 AMD will also provide an Opteron A-Series development kit in a Micro-ATX form factor with the following specifications:

The AMD Opteron A-Series development platform will run a standard UEFI bootloader, and a Linux environment based on the Fedora Project Linux distribution. Other tools and software packages include the GNU (cross) toolchain, platform device drivers, a full LAMP stack with Apache web server, MySQL database engine, and PHP, as well as Java 7 and Java 8.

Anandtech reports the development board will be available in March, and actual servers should be launched in Q4 2014. They’ve also mentioned the ARM solution should cost a tenth of the price of a competing high-end Xeon box, and AMD expects ARM based processors to make up about 25% of the server market in 2019.

You can check the webcast and/or AMD presentation at the Open Compute Project Summit @ http://ir.amd.com/phoenix.zhtml?c=74093&p=irol-eventDetails&EventId=5092187

Nothing about ERP cost or ETA retail availability?

And nothing about third-parties who committed to manufacture motherboards and servers with these chips?

AFAIK, AMD did not mention any customers / hardware partners yet.

What I’m really excited about is the dev boards. If these are nicely priced they could be a very good solution if need some ARM power :).
I’m hoping for decent pricing, not something like $1000. I also wonder what GPU they’ll use … or will the uATX board lack any video output ? We shall see I guess.

This CPU (real CPU, without IGP, so no APU/HSA) is really close competition to the Intel Atom C2750 (Avoton), and I have been awaiting for it, finally some real competition to the microserver biz. Too bad the article forgot to mention the gem on AMD’s slides about its dual 10 Gigabit Ethernet connectors (QSFP+?) being “legacy”. 😀 @Marius This is pure CPU, with an obvious external BMC functionality, thus NO internal GPU (just like AMD have told from the get go about this Berlin CPU), and you can see by the board picture that there is the standard BMC VGA… Read more »

@anon
Ah OK so it has a basic graphics capabilities at least … that’s actually what I wanted to say, maybe GPU was a bit wrong in this context. Something has to power that VGA though 🙂 HDMI would be nice too but I suppose VGA will do.

@Lewis
True but you might still want to connect them to a screen sometimes. If you look at servers I think most if not all have basic keyboard, mouse and display capabilities.