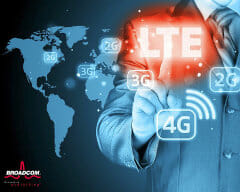 roadcom Corporation has introduced a turnkey reference platform designed to help OEMs develop sub $300 4G LTE mobile devices. The smartphone reference design is powered by M320 SoC with a dual core ARM Cortex A9 processor up to 1.5GHz, a PowerVR 5XT GPU, and Cat 4 LTE modem with DC-HSPA+ and GSM multimode capable of delivering data transfer at up to 42Mbps.

The platform runs Android 4.4 Kitkat, and will be able to make use of the upcoming pin-to-pin compatible M340  quad-core LTE SoC .

Broadcom M320 LTE SoC is in production now, and M340 will be sample in H1 2014. As usual there’s no information on Broadcom’s website. The company will showcase its Category 4 and Category 6 LTE solutions at  Mobile World Congress 2014 in Barcelona, on February 24-27.