We already knew Mediatek was working on MT6592, an Octa-core Cortex A7 processor for smartphones, and MT8135, a quad core bit.LITTLE processor for tablets, but in the last few days, the company revealed a bit more information about its two new application processors, mainly to show how better there are compared to the competition.

With Exynos Octa (5410), Samsung was the first company to release an ARM powered Octa-core application processor, but Meditak explains their solution is better because MT6592 can use all 8 cores simultaneously whereas Exynos 5410 is limited to 4 at at time, and the claim is true because Samsung big.LITTLE implementation choice. 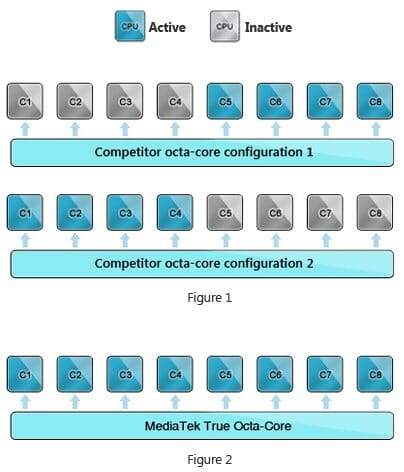 Exynos 5420 will change that however, as soon as this month, but Mediatek obviously did not feel necessary to mention this details.

The company expected those 8 cores to improve current applications such as :

The company provided a somewhat interested chart showing desktop application were only supporting single core operating in 2010, moving to support dual, quad and even octa cores support in 2013, and that many mobile applications are expected to support up to 8 or more cores in 2014 and beyond 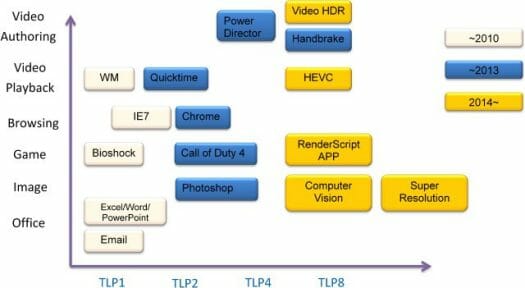 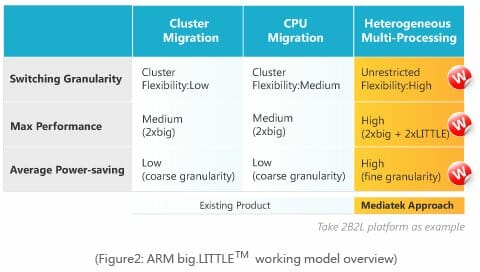 The company compared their MT8135 reference tablet with competing tablets.

Geekbench probably only used the 2 Cortex A15 cores, as the difference with Exynos 5 Dual can just be explained with the CPU clock difference (2.0 GHz vs 1.7Ghz), so in this test, I assume the Cortex A7 were not used.

Mediatek reference tablet is smaller than the other tablet tested, which is fine, but if the resolution is different the results cannot actually be used to compare anything… GLBenchmark 2.5 offscreen, is always using 1080p (AFAIK), so it may provide a reliable comparison, and shows PowerVR SG6200 GPU provide slightly better results than Mali T-604 GPU (About 15%). Vellamo and Antutu 3.0.1 scores are much better for Mediatek tablet, but I believe it may be due to the lower resolution in the reference tablet, and the actual CPU/GPU performance gain is likely to be just around 20%, not the nearly 100% shown in Antutu. If Mediatek had provided the resolution of their tablet, we would not have to guess… Rookie mistake, if you ask me 😉

I will waiting for this SoC MT8135 DevBoard !
I planned make on this KVM for ARMs (http://systems.cs.columbia.edu/projects/kvm-arm/)

@ch0mik
I’ve never seen Mediatek work with anything else than smartphones and tablets manufacturers, so getting an MT8135 dev board might be challenging unless you work for one of these.

@ch0mik
I’d just like to add if you need to try KVM on ARM, Linaro has ported KVM to ARM and provided instructions for the Arndale board: https://wiki.linaro.org/LEG/Engineering/Kernel/KVM

If you work as an individual, bear in mind that many people have complained they don’t get any support for the Arndale board, and the forum is basically dead indeed, and unmaintained (full of spam). http://forum.insignal.co.kr/viewforum.php?f=10&sid=07513450a0e5a34bcc5f7ac386e8381f

@Jean-Luc Aufranc (CNXSoft)
I am actually afraid that we won’t see Arndale Octa board and even if it’s released it would be 5410. I want GTS and all 8 cores running. I use all my ARM machines for building RPMs, more power is needed. If you would look into hardkernel (think ODROID) repository you might notice that hardkernel pushed 3.11 kernel branch (and later deleted it). One of the interesting commits:
Add initial device tree nodes for EXYNOS5410 SoC and ODROID-XU board.
Add the required pin configuration support to EXYNOS5410
using pinctrl interface.

How long will it take until we get
a small developer board with this kind of chip ?
In the meantime we play around with whats available.
Have a look on my blog about ARM based computers and boards which run Linux.
http://bitkistl.blogspot.co.at/