Leon Anavi has spent some time building and running Tizen for Olimex A10s-OLinuXino-MICRO board based onAllWinner A10s cortex A8 processor, and gave a short presentation at FOSDEM 2014 showing the main steps involved in the project. The final result is basically a non-portable Tizen tablet with a main board connected to an LCD display. If you have an LCD screen, you could also use a monitor (VGA/HDMI) instead. 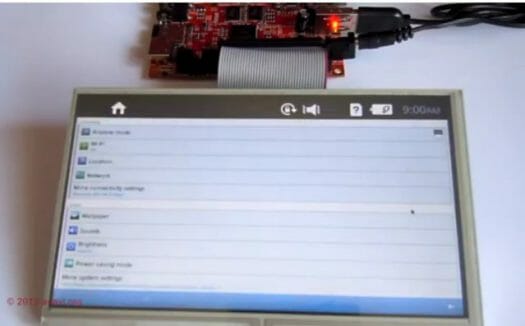 After a short description of the hardware, and explaining it should also work on other AllWinner platforms such as Cubieboard, Leon gave a few no-nonsense recommendations he learned from his mistakes:

In other to port Tizen to Allwinner, he took an existing port for the Pandaboard (TI OMAP4), use linux-sunxi bootloader and Linux kernel code, and followsed three main steps:

You can download the binaries for A20-OLinuXino-MICRO and A10s-OLinuXino-MICRO, and get the instructions to build an image for other AllWinner based devices on tizen-sunxi github repository.