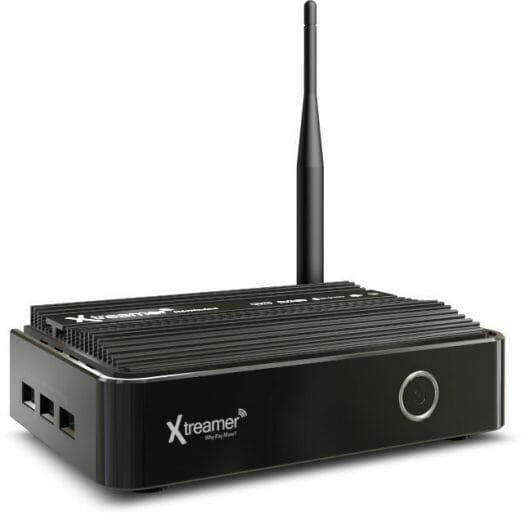 Let’s get right to the specs:

The device runs Android Jelly Bean 4.2.2, and comes with an air mouse (remote control), an HDMI cable, a 5V/2A power Adapter, a USB cable, adn a quick start guide. Interestingly, SideWinder4 appears to be modder friendly, as the company also mentions support for root access, and init.d scripting.  The firmware supports Airplay & DLNA by Airpin, CIFS mount, XBMC plugins & repo (Fusion, Xfinity and mashup pre-installed), and OTA Update, a features a setup wizard, as well as kids mode (parental control?). USB Camera should work with this firmware, as they recommend Logitech Cams for their device. They also have an interesting feature called PushBullet, that will show your phone notifications on TV.

It’s the first time I’ve heard about this company, but they seem to have been around for a few years already. Based on the specifications on their website, it feels like they know what they are talking about, as features such as  5.1 and 7.1 audio pass-through, CIFS mount, or init.d scripting are rarely mentioned in specs. I also like the fact they’ve gone with an air mouse, albeit simple, with their product, as standard IR remote are usually pretty much useless with Android, unless you only use XBMC. XBMC and corresponding plugins and Cheapcast can be installed for free on any Android devices, but it’s still nice to have them pre-loaded if you need a device that’s just plug and play. Bear in mind that Cheapcast will only provide some of functionality of Chromecast, but YouTube and Google Music should work. The company also has a forum, a download page (for firmware, nothing there just yet), and a Wiki with mods and source code, but only for previous products at this time, as SideWinder4 has yet to been released.

Thanks to .jon for the tip.

xtreamer are a company with a very shady reputation going back into the days of Realtek/Sigma based media players, most people avoid them.

False promises, lies, forums were uses are banned for any even minor critic and terrible support.

@Dan :(:(:( this actually looks quite attractive from the specs. Unfortunate it’s only dual core & the bundled air mouse seems to lack a keyboard though…

@Dan
Thanks for the feedback, even though that’s disappointing. Normally companies with online forums should be better as there’s a least some sort of users’ support usually not found in many Chinese companies, and you have to rely on communities such as Freaktab or Arctablet for support.

@onebir
I’m pretty sure they’re no keyboard on the back. It would have been nice if the air mouse was an option for those who already have one.

Same comment for http://www.cnx-software.com/2014/02/14/android-tv-box-with-satellite-dvb-s2-support-sells-for-93/ None of these DVB TV tuner receivers will however not work with XBMC yet since upstream Tvheadend back-end server have not been ported to run natively on Android https://tvheadend.org/boards/5/topics/10286 https://tvheadend.org/issues/1921 I would wait to buy any of these until there is an open source PVR back-end server available that is compatible with XBMC so that you can actually until the DVB tuner in XBMC. Again, also checkout Geniatech ATV1220 Android box and Geniatech PT115 USB DVB http://www.geniatech.com/pa/atv1220.asp http://www.geniatech.com/pa/pt115m.asp Geniatech ATV1220 can be bought for US $89.10 http://www.aliexpress.com/item/Pre-sale-Geniatech-ATV1220-Enjoy-TV-Box-Built-in-DVB-T-Tuner-receiver-Dual-Core-Hybrid/1002912840.html Geniatech PT115 might only be on sale to OEM… Read more »

Oh, and Dan is right that Xtreamer as a company is a bit shady, becuase who else but a shady or unbelievably naive company would preinstall the “Fusion, Xfinity, and Mashup” addons/repositories for XBMC, as they are only installers for addons which contain illegal and pirated sources.

It’s true, that the reputation of this company is sub-par. Even to just read their forums one must register. However, for 79€ I feel tempted.

Avoid it,, and take care in xtreamer support forum, if you make complains your will be banned from their board as me, i know for sure that will never see my money, they support is the worse available, you can ask questions, but they operators are really unfriendly as most is possible.
Also, xtreamer prodigy 3d has never fixed bugs and firmware development is stopped.