After an earlier Intel presentation about Intel RealSense Technology by Mooly Eden, Intel Senior Vice President and General Manager, the newly appointed Intel CEO, Brian Krzanich, officially opened CES 2014 with the pre-show keynote. This time there was nothing about processors for PCs, and the announcement the most interesting and relevant to this blog was Intel Edison, a tiny SD-card sized board powered by a dual core Quark SoC. 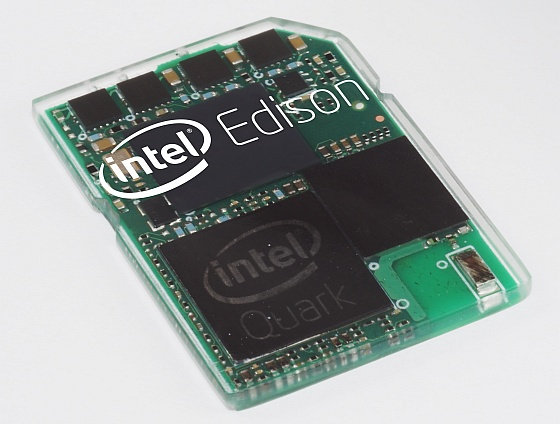 The board will support Linux, and common open source tools used by the marker community. It will also support Wolfgram language and Mathematica. There will also be an app store.

They showed off the Edison board with a “Nursery 2.0” demo by placing a modified version of Rest Devices’ Mimo Baby Turtle on a baby doll and showing it transmit heart rate and temperature data to smart illuminated coffee cups, and automatically start a smart bottle warmer if it detects the baby is hungry.

There’s not much more details for now, but further information should eventually pop-up on Intel Edison page, once it becomes available mid 2014.

I’ll also quickly cover the other parts of the keynote, and it started with other wearable reference designs including:

In order to get the community more interested in working with its platforms, Intel has announced the ‘Make It Wearable’ Challenge promising a total of 1.3 million US dollars in prizes, with the winner getting $500,000, and the top 10 getting 2-month mentoring to bring their wearable products to market. It will start in summer 2014, check this PDF for a few more details, or sign-up on www.makeit.intel.com if you would like to participate.

That was all for wearables at this stage, and the CEO moved on to showcase dual OS computers supporting both Android and Windows, and instantaneous switching between the two by the touch of a button.

The next demo was pretty interesting, as they showed a tablet equipped with RealSense 3D camera scanning a small doll to create 3D model, modified it with gesture to become a keyring, and printed it to a Cube3D printer. This type of tablet will be available at the end of 2014, which could lead, IMHO, to 3D printers becoming mainstream in 2015 or 2016, as it becomes easier to create models, and prices come down.

The rest was a bit less interesting (to me) with Dreamworks coming on stage to show a clip of their latest animation movie (hidden from online stream), another augmented reality demo with the tablet equipped with a 3D depth camera, Valve showed their new game on Gigabyte BRIX 2 running Steam OS, and the CEO announced all Intel processor are now using conflict-free materials, before concluding by bringing winners of previous Intel developer challenges on stage.

You can watch the full keynote below (one hour).

So this is a x86 CPU, and not ARM and not something else? Correct?

@Sander
This is not Quark X1000 (32nm) SoC used in Galileo board, but another dual core Quark SoC manufactured using 22nm process.

Nevertheless, yes, this is a “Pentium class” x86 processor. In the board itself there’s also another Intel MCU, but I’m not sure what it is.