Mediatek and their customers have still not gotten into the habit of complying with the GPL license, and releasing the relevant source code such as the Linux kernel. There appears to be at least one smartphone, Wiko Stairway, where the Linux kernel has been released, and chrmhoffmann, a members of XDA developers forums, has even released on unofficial CyanogenMod 11 ROM (Android 4.4.2 Kit Kat) for the device. 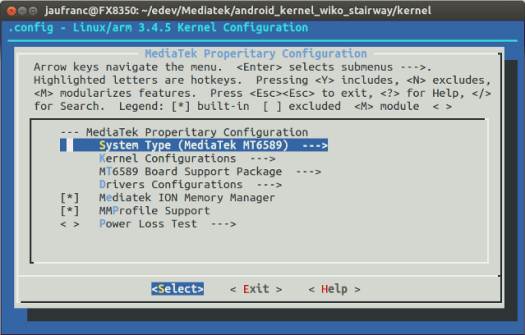 There are three source repositories for the Linux kernel, “android device“, and Android.

I’ve only looked into the kernel which is version 3.4.5. Mediatek has apparently messed up the Linux kernel quite a bit, and you’ll have to do some funny things to build the kernel, and all Mediatek options in menuconfig are in a sub-section called “Mediatek Properitary Configuration” (sic.), and it’s not possible to simply go to System Type menu to change the processor type for instance.

Let’s get the source first:

So together with the kernel, we’ve got the bionic library, and the modifications done by Mediatek in the mediatek directory. The Makefile is this Linux kernel is set to use the Android gcc toolchain (arm-linux-androideabi-gcc), but I tried to build the kernel with CROSS_COMPILE=arm-linux-gnueabihf- instead, and it failed along the way with the following error:

This is from code added by Mediatek, and at first I just disabled it, but a similar problem occurred in the wlan drivers. Some research indicated in may be a toolchain problem, so I’ve installed the latest Linaro Android toolchain and added it to my path:

And started the build:

Same error. So I gave a last try with an older Linaro Android toolchain using gcc 4.6, and this did the trick:

As for the current CM11 ROM, phone calls, SMS, data (2G, 3G), Wi-Fi, audio, and most sensors are working fine, but there’s still more work to do as the second SIM card, the camera, hardware video decoding, GPS, Bluetooth, FM radio and some MTK specific features are not supported yet. It may not be wise to try it on MT6589 hardware other than Wiko Stairway, as you may brick your device.

I really hate when hardware vendor release (or even try not to release) broken software. Sorry Mediatek, I won’t buy you.

And it’s not the first device with GPL source code from manufacturers:
http://developer.sonymobile.com/downloads/xperia-open-source-archives/open-source-archive-for-build-16-0-a-0-47/
https://github.com/oppo-source/R819-Kernel-Source-4.2
etc…

Of course the ThL, Zopo, Tronsmart.. of this world did not release anything…

Any VPU libraires or scource code for hardware video decoding on Mediatek SoCs from themselves or its partners?

@Jean-Luc Aufranc (CNXSoft)
By broken software I mean the bad habit of not even remotely thinking of merging work upstream, and hacking something that works only on kernel x.y, builds only on toolchain A version B, dropping tar.gz instead of publishing on git, etc. I know that’s “open source” too, but I tend to don’t buy everything that is and probably won’t be merged in mainline. Support is likely going to last less than 1 year instead of several decades (as it’s the case for Intel 486).

@Diego.
I meant “that is not merged in mainline”.

compiling errors, caused by newer toolchains and related to inlinig aren’t something special for mtk. i have had this as well on samsung and nexus devices. fixing it isn’t too hard…

btw: trying to compile with linaro 4.8 toolchain is kind of funny. there are plenty of android kernels out there which don’t compile with it, without modifying the source. and even if it builds, the kernel often doesn’t boot.

THANK YOU SO MUCH! You HAVE to use toolchain version 4.6 (git clone https://android.googlesource.com/platform/prebuilts/gcc/linux-x86/arm/arm-linux-androideabi-4.6) for https://github.com/keesj/alps-fairphone-gpl