Next Unit of Computing (NUC) is a small form factor PC designed by Intel featuring “low power” Intel CPUs. It has gone through different iteration starting with Sandy Bridge Celeron CPU, then Ivy Bridge Core i3 and Core i5 processors in the second generation, with the third generation using the Haswell architecture. Intel latest model called Intel DN2820FYK NUC is based on “Bay Trail” Celeron N2820 dual-core processor @ 2.4 GHz with 7.5W TDP, and is now available for $140 on Amazon 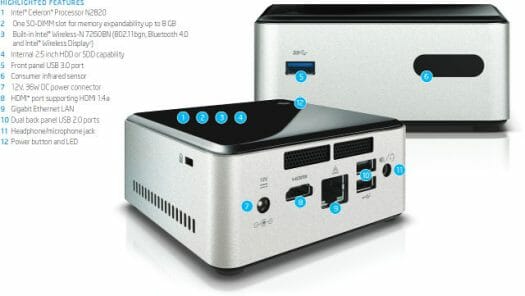 Intel new mini PC comes with VESA mount bracket (75x75mm and 100x100mm compatible), with screws, a  12V, 36W wall-mount AC adapter with multi-country AC plugs (IEC types A/C/G/I), an Intel Celeron brand sticker, and an integration guide. The full kit is named DN2820FYK as mentioned above, but the motherboard itself is DN2820FYB. The computer will run Windows 7/8 or Linux distributions. Despite the low power consumption of the processor, this is not a fanless system as Intel mentions it is “low-acoustics active cooling design”, but FanlessTech reports a fanless SKU might be in the work. There’s a 3-year warranty with the system which is nice.

The kit sold on Amazon does not come with RAM nor storage, but Liliputing found out that thebookpc.com sells the new Intel NUC with different options for RAM, hard drives or SSDs, and more, and full working system with 2GB RAM, and a 256GB hard drive will cost $239.

I am waiting for a fanless version or if i have to buy a passively cooled case myself, i also could get a core i3 powered DC3217BY, which is only 10€ more expensive than the DN2820FYK kit in germany. To me its a bit disappointing Intel didnt take the oppurtunity to release a fanless version of the Bay Trail based Kit in the first place.

On the other hand first gen I3 thunderbolt nuc (BOXDC3217BY) is sold for 161.49 usd at amazon.
I bought one to myself from ebay and it works pretty good. HD4000 and I3 also supports 3D bluray full sbs, which is not supported in celeron/pentium cpus.

It is Ugly …..
There is a excellent benchmark of qual-core Bay Trail on http://www.anandtech.com/show/7314/intel-baytrail-preview-intel-atom-z3770-tested , very detail.
It seems Intel has deliver a processor that would threaten the ARM market. However, some of the features are based on Intel’s more advanced manufacturing process. It will be interesting to see performance of ARM-8 and see how that compares.

@Jacky @Jacky: talking about Intel threatening “the ARM market” makes absolutely no sense. Which market are you referring to? The ARM architecture has practically a monopoly on both the smartphones and tablets markets and this is not about to change. Personally I fail to see how Intel can position these low performance / low power Bay Trail processors in any market: too slow for notebooks and HTPCs, too power-hungry (if you consider the required extra glue-logic) for smartphones and tablets, not to mention their price which makes them somewhat unattractive for low-cost devices. Time will tell, but whereas I see… Read more »

@Andrew “not to mention their price which makes them somewhat unattractive for low-cost devices.”
I read somewhere they’re currently heavily subsidized, so their prices are unlikely to drop rapidly too, unlike ARM processors…

The newly announced Asus Chromebox looks similar with Intel Celeron 2955U processor @ 15W TDP, but should be cheaper ($179) as it includes 16GB SSD, and 2GB RAM – http://promos.asus.com/us/chrome-os/chromebox/

The first test with Linux show there are some problems with Ubuntu 13.10, but modifying some BIOS settings, and upgrading to the very latest kernel seems to improve things a bit – http://www.phoronix.com/scan.php?page=article&item=intel_baytrail_nuc&num=5

It’s for industrial use, and based on Intel E3800 series.

Somebody tried this NUC with XBMC (OpenElec, and XBMCbuntu)
http://www.umpcportal.com/2014/05/intel-nuc-as-low-cost-media-center-with-openelec-xbmcbuntu-how-to/