A few days ago, we’ve seen Chromium OS running on Rockchip RK3288 development platform. I’ve been informed the source code could have already been released via the newly registered rkchrome github account with Linux kernel 3.10.30 and the overlay files to build Chromium OS for RK3288. There’s also a u-boot repository but it is currently empty.  This Linux kernel can also boot Rockchip RK3188 based Radxa Rock development board, but more tests are needed to see if it’s really usable.

I’ll have a look at the Linux kernel, and try to build it, and leave the Chromium OS part for later or other people. 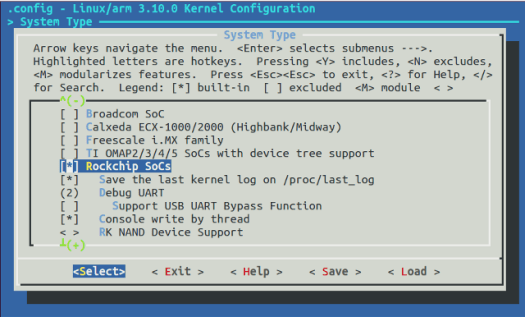 But since this is a recent 3.10 kernel with support for Flattened Device Tree support, and multi-platform support, there’s not much to be seen in these files, and we have to go to arch/arm/boot/dts/ where we can find several rk3188 and rk3288 related files:

dtsi files contains parameters relevant to the SoC and common to all hardware platforms. dts files are device specific. All dts file seem to include an LCD display so they may all be for tablets.

Let’s try to build the kernel with one of the default config in Ubuntu 14.04:

The build actually failed due to some inlining issues such as:

But each time, editing the code to remove the inline declaration, e.g. “extern inline void” to “extern void,” fixed the build, and eventually I could get a zImage that in theory can boot RK3188 or RK3288 based devices.

If you want to generate the dtb (Device Tree Binary) file from the dts you can run something like:

Thanks to Omegamoon for the tip.

Now this is indeed exciting, to have a kernel with device tree support.
This means that at least in theory all you’d have to do to get it working on a new device would be to extract the device tree from that device and voila. Pretty amazing if it works.

Thats very interessting. Is it correct that also the VPU & GPU drivers are supported within this alternative linux version? If that is correct maybe that we can port it to the Rk3188 and RK3066?

@Menno
As usual the kernel GPU drivers are available. I haven’t checked if the user space GPU binary blobs were available in the Chromium OS overlay, but in any case, we should be able to get them once RK3288 Chromium OS devices are available for sale. I doubt these will be usable in RK3066/RK3188 as it is another generation of Mali GPU.

@Jean-Luc Aufranc (CNXSoft)
That’s true for the GPU but not for the VPU, the latter will make possible video acceleration so, for example, we will be able to watch a video in fullscreen.

Do you know if binary blobs are available for the VPU, composed of on2 hantro encoder and decoder? 🙂

@tonikasch
Binary blobs? They’ll be somewhere in the firmware anyway.
I hope their Chromium OS support includes VPU support as well, but I have not checked in details.

Note the email of the person doing the commit.

and rockchip really need to step in this bussines

Samsung has 5000 developers on android

I was just pointing out that the Chromium guys are working on mainline RK3288 support which mean there’s probably a company out there that’s going to use Chromium on a device equipped with a RK3288 SOC.

As for developers well yes, Samsung has lots of them I’m sure but then again Sasmsung can afford to and Samsung does all kind of Android customization.

@Marius
I’ve been told some Rockchip employees work in Google offices…
Based on these commits, I would not been surprised if a Rockchip RK3288 based Chromebook / Chromebox was announced soon.