As some of you already know, I’ve been playing around with Tronsmart Vega S89 Elite, an Android TV Box powered by Amlogic S802 quad core ARM Cortex A9r4 processor at 2 GHz. Today, I’ll show how to boot a headless Linux image on any Amlogic based S802 TV Box from the network. The instructions can mainly be used as a starting point for developers, as it requires access to a serial terminal via  UART, but if you’ve never done it before, the instructions should be easy enough to follow. Everything is loaded from the network, the kernel (via boot.img) is loaded via TFTP, and the rootfs (Linaro ALIP image) is mounted via NFS, so it’s nearly impossible to brick your device using the method provided. Linaro ALIP rootfs comes with LXDE, but at this stage the desktop environment is not showing, even through my HDMI TV is properly detected by the drivers. However, Ethernet, USB mass storage, and the micro SD seem to be working just fine. 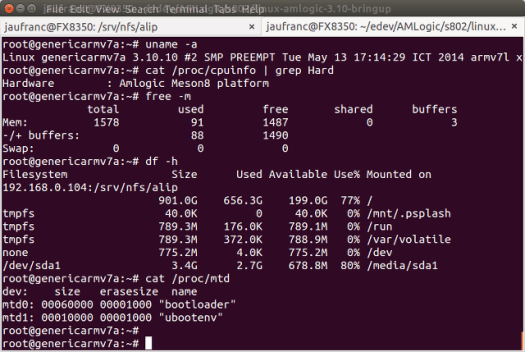 If you want to skip the kernel compilation part, ramdisk modification, and just boot your Vega S89 Elite from network you can download vegas89eboot.img (compressed with bzip2), and skip steps 4 to 9 included. Please don’t just flash this image or use it without reading the post, as even if it should not brick your device, Android won’t boot at all if you don’t follow the right instructions.

Let’s have a look at free memory, storage devices and more.

There’s about 1.5GB ram free, I’ve got a lot of storage in the root as it is the 1TB hardware in my PC, and my 4GB USB flash drive was almost mounted automatically.

I’ll also through the CPU information for reference:

You should easily be able to adapt these instructions to boot from flash, by inserting boot.img into one of the available firmware update packages, and switching root to a USB flash or hard drive with the rootfs. I’m not sure how to access the flash partitions right now, as only the bootloader shows up in the MTD partition, but it;s the same thing in Android.

I’m not sure I’ll go much further myself, but hopefully some people will pick up on this, and we’ll get a fully working easily installable Linux server and desktop images for Amlogic S802 based platforms.

XBMC build on pure buildroot use this to init video output
https://github.com/CoreTech-Development/buildroot-mx_linux/tree/2013.11-Amlogic_Gotham/board/amlogic/M6_MX/overlay/etc/init.d

This it for hw accelerated compositing and and opengl support in applications.
How to X.org on mali from arm mali directly 🙂
http://malideveloper.arm.com/develop-for-mali/features/graphics-and-compute-development-on-samsung-chromebook/

But you will need
mali drivers for x.org
https://github.com/linux-sunxi/sunxi-mali-proprietary

Hey, I ‘m here again 🙂 Thanks for maintaining such a awesome site! It always gives me surprise.

So it ‘s *completely* possible to build a usable linux kernel on s802? By “completely” I mean USB support, cardreader support, gpu, and so on. I read your last post, device tree for s802 is available!

If it ‘s possible to build a perfect kernel, then I ‘m going to give up the aml8726mx hack, and turn to s802 happily.

@Riaqn
But most of as will be still happy to see 3.10 kernel on aml8726mx devices 🙂
https://github.com/CoreTech-Development/buildroot-mx_linux/issues/5

@Riaqn
USB support, card reader yes.
GPU is more complicated. Having a desktop on the framebuffer should be feasible, but 2D/3D hardware acceleration is more tricky. Links provided by @m][sko should help.

If these “pesky” RK3288 and AllWinner A80 were not hitting the market soon :), I’d be more confident a community could gather around S802. We’ll see.

@m][sko
Hi, thanks for the link, a group of awesome person. 🙂
I ‘m quite new to linux on arm. Does it have to take so much effort to make it boot? I cannot run linux on my aml8726-mx now, I think just because there is no dtd file matching my device. Will my device be supported if these cool guys work things out?
BTW, does it take special steps to boot a kernel consisting a dtb? I just load the boot.img and “bootm” as usual. Just to make sure 🙂

@Jean-Luc Aufranc (CNXSoft)
Oh god, I just saw my device is listed on their README!

Though I don ‘t know which one to use…does it mean something special to me? I mean, Do they have dtd file or something?

@m][sko
Well without the dtd file it’s too hard for me to make it…I probably have to wait till the official android firmware go to 3.10…then I can get the dtd file. But it will never happen(a tvbox ‘s kernel needn’t to be up-to-date, haha).

@Riaqn I’ll just clarify again: With Linux 3.0.5 – The hardware is defined with the board file (C language) + .config With linux 3.5 and greater – The hardware is defined via device tree files (DTS/DTB). Before I checked Amlogic source code, I never heard about DTD by the way. So since they are using 3.0.5 device tree file are not usable… as it’s not supported by the kernel. @m][sko I really thought the source code was available. But after re-reading things like http://www.cnx-software.com/2012/08/18/amlogic-releases-aml8726-mx-linux-3-0-8-source-code/, the code appears to be incomplete so it’s not really usable, except maybe on some specific… Read more »

If it possible please post a full kernel boot log and if there’s any debug output when running “ip” command or “ip addr” then please also post it.
I’ve been trying getting ethernet working with kernel 3.10 on meson6 (Arch Linux, systemd) without luck ATM.

Thanks, I’m not sure why would this make any difference, it’s just the same value in hex instead of dec.
From a brief look at the 3.0.50 source I think the intterupt num is the same for the meson6 (40 or 0x38) so I’ll give it a try (ethbaseaddr is not the same).
Probably next week I’ll play a bit with the uboot sources and try get a FTD enabled uboot on my device to see if it would help.

dhead :
@Jean-Luc Aufranc (CNXSoft)
Thanks, I’m not sure why would this make any difference, it’s just the same value in hex instead of dec.
From a brief look at the 3.0.50 source I think the intterupt num is the same for the meson6 (40 or 0×38) so I’ll give it a try (ethbaseaddr is not the same).
Probably next week I’ll play a bit with the uboot sources and try get a FTD enabled uboot on my device to see if it would help.
I meant 0x28 of course.

@Riaqn
It must be a bug. I think I’ve some people talk about the same type of issues with Linux on the Wandboard (Freescale i.MX6)

@dhead
Oops that’s embarrassing… I thought both values were written in hex. So it’s definitely something else.

@Riaqn
That was not wandboard but GK802, and it was a bug in the kernel. It could be the same in your case.
https://groups.google.com/forum/#!topic/imx6-dongle/XBrh4_iPyUM

@Jean-Luc Aufranc (CNXSoft)
Thanks for your link, there ‘s a discussion here too, http://www.linuxquestions.org/questions/linux-server-73/server-with-high-load-average-and-no-obvious-reason-677824/
I check my system with the command in the thread, it turns out to be 3 process related to hdmi and 1 process related to cardreader. I ‘ve reconfigure the kernel and disable the hdmi. Now the load go down to 1. Since the bug doesn’t affect the performance actually, so I just stop here.
By the way, the kernel-3.0 Stane1983 maintained is perfect. 🙂 Though with only experimental nfsv4 support, but ‘unstable’ is better than ‘cannot boot’.

@gizmomelb
We don’t have problem with kernel sources
http://www.cnx-software.com/2014/03/10/amlogic-gpl-source-code-release-kernel-3-10-u-boot-and-drivers-wi-fi-nand-tvin-mali-gpu/
We have problem with version as amlogic don’t release up to date version from their git for public

I decided to create my own monstrous linux-meson repo just for kicks (I’m not much of developer and surely not kernel developer) and I pulled in also this kernel tree, will have fun next week with the sources.

@m][sko
and sometimes the “dtd files”, too, as amlogic doesn ‘t release dtd files of their customers’ board, some of which don’t have a firmware later than 3.5, from which we cannot get a dtd file.

just curious if you’ve had a look at the source I linked… it’s the (leaked) same source and tools used to build the official 102K4 firmware for the Tronsmart S89 and Beelink M8 S802 Amlogic media players.

This kernel tree fixed my issues with ethernet on meson6, I now running Arch Linux on the g18.

Is there any new info on this? Has anyone got full Linux booting?

Hey,
So is there an easy installable image already?
I would love that!

@Pedro
I haven’t worked on it since then, and I know some Linux developers have Vega S89 Elite, and MINIX NEO X8, but nobody has released an image yet.

@lionnet
Looks like your TFTP daemon is not running, or you firewall blocks it.

I haven’t checked how to flash to NAND in details, but I’d imagine you can use one of the Android firmware update package, and modify it for Linux.

@Jean-Luc Aufranc (CNXSoft)
Thanks for your reply! I run Tftp daemon on the same machine that I use UART. So I think not problems from firewall or TFTP, the problems in the parameter bootargs. So please let me know how to set IP static not DHCP like you show me.

Another hands, I follow the http://www.stane1983.com/amlinux/ to put linux but this is not linux, I cannot install any package on it. So you can show me how to put debian or ubuntu through Android firmware update. Thanks