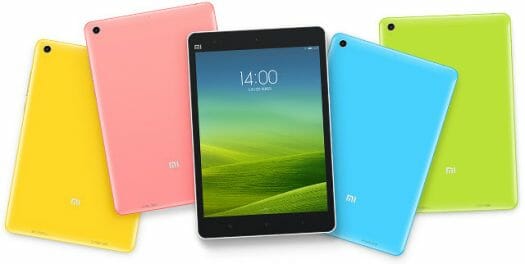 Here are the specs for the MiPad:

The first tablet by Xiaomi happens to be the first consumer tablet featuring Nvidia Tegra K1 SoC. It will run MIUI which is based on Android. The tablet will sell in China initially, with a beta taking place in June, and sales to the general public during the summer. Despite Xiaomi push into international markets, it might be difficult to sell in Europe and Asia, as if we are to believe comments on G+, the product itself, and the advertising campaign look a bit too similar to Apple iPad Mini. More information is available in Xiaomi MiPad product page (Chinese).

Looks really nice ! It’s only too bad there is (apparently) no video out (no HDMI, no MHL…). Otherwise it might have completely replaced my laptop.
Hope the whole MIUI firmware source-code (incl. kernel and device-tree) for this product will be published.

Shame this will be impossible to get in the West…

@Someone from the other side
It will show up on Aliexpress or Ebay, but probably for $300+.
Allwinner a80 based tablets will have similar performance.