Many companies have launched activity trackers, some small watch-like device that you wear around your wrist, and that monitor fitness related data such as the number steps and the distance you’ve walked during the, the calories you’ve burnt, and even your sleep quality. However, I’ve never understood why you would pay more than $30-$40 for such devices, let alone around $100. Vidonn X5 is one of the low cost devices that still looks decent, and can be found on many Chinese online stores for about $40 to $50. But DealExtreme currently has a promotion selling the device for just $27.61 which makes it even better value. 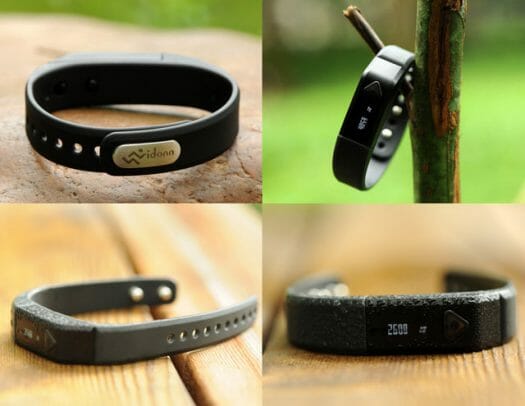 The device will monitor your fitness data and synchronize it with Bluetooth LE enabled mobile devices such as iPhone 4s and 5, iPod Touch 5th generation, or Samsung Galaxy S4 using Vidonn Smart Band app for iOS or Android. If your phone does not run Android 4.3 or greater, or iOS6 or greater, it won’t be supported. So instead you may also synchronize your data via the micro USB port, for example while charging, of a computer running Windows XP/7/8 or Mac OS X 10.5+. The download section of the site also provides Windows apps however. Linux is not supported. You can also monitor your data via “User Center” web interface.

The button is used to cycle through various modes: clock, walking time, calories, alarm clock, number of steps, and sleep quality. You may want to watch the good review below made by gradezero. He basically considers the hardware to be fine, but the software could be improve, especially for the Android app, and the web interface being much better. One downside I found out is that sleep detection can’t be automatic, so you have to set the time manually.

Only the black version is discounted, and the pink and green versions sell for around $40. You can find more details on Vidonn.com.

Oh.. The promotion is already over. You can now only get a tiny $2 discount using SUBSCRIBERJUN coupon.

Real shame, I was looking for this.

Help I live in the UK and I cannot download the driver for my PC, everytime I try to it brings up a page in Chinese.