Yesterday, I wrote about Wimoto Motes, tiny Bluetooth LE devices with several sensors that can be controlled and monitored via an iOS app, and soon by an Android app, as well as Linux devices. Each mote costs $39 plus shipping, and one commenter mentioned the price may be a bit too high. A Google search for “bluetooth sensor” immediately brings TI SensorTag, which looks somewhat similar, except it is a Bluetooth LE development kit, includes 6 sensors (but no light sensor), and only costs $25 including shipping. 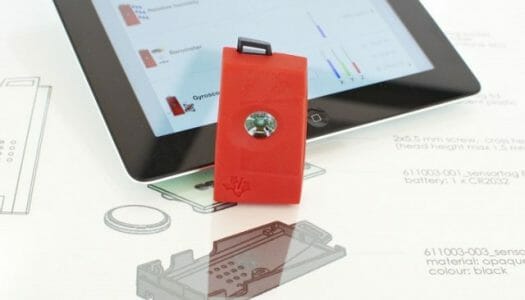 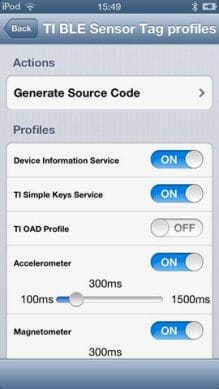 SensorTag devkit comes with a SensorTag with an enclosure, one CR2032 battery, one screw, and a quick start guide.

This development kit is mainly designed for smartphone app developers as no embedded software designer or compiler is required.  Currently SensorTag only works with iOS and Windows PC, but it will eventually support Android, once a standard Bluetooth 4.0 LE (SMART) API is available. However, if you check out the Wiki, you’ll find some instructions are also available for HTC Once, and Linux devices (Raspberry Pi).

To get started, download and install TI SensorTag app to your Bt 4.0 enabled iOS device (iPhone 4S, iPhone 5, iPod Touch, or the new iPad), press the side button on the SensorTag to connect the two devices, and play around with the sensors from the application.
The application also has a “Generate Source Code” button to show you the source code. Sample code can also be downloaded from TI website.

If you don’t have an iOS device, you can also install BLE Device Monitor to communicate with SensorTag from a Windows 7/XP computer fitted with CC2540 USB dongle, or possibly, another Bluetooth 4.0 LE compliant USB dongle (TBC).

Finally the company also provides CC2540/41 Bluetooth low energy (BLE) software development kit for both the controller and host, as well as the hardware files (Schematics, BoM, and PCB layout) for the kit.

If you’re interested in an introduction about Bluetooth 4.0 LE, and learn how to use and program SensorTag, you can watch the short 15-minutes video tutorial below.

Now that’s more like it. Good stuff and the price is a lot better. Thanks for finding this and writing about it.

@Marius
I’ve actually ordered one with delivery schedules for July. The delay is OK because I need to find a BT 4.0 dongle now. I’ve seem a few on dealextreme, but I’m not sure if BT 4.0 = BLE supported.

Damn, I specifically subscribed to TI newsletter to be in loop on such stuff, and instead I get week after week of boring news of BBBlack released 2 months ago and reminders that MSP430 still exists. You’re doing it bad, TI, you’re doing it bad since you raised MSP430 Launchpad price. SensorTag appear to have been released at least 1.5 months ago and no buzz completely. Well, CNX is to the rescue, as usual – another day, another impulsive buy ;-). Well, CC2541 with 8051 core sucks grossly for hacking comparing to for example nRF51 with Cortex-M0. But yeah, RFDuino… Read more »

SensorTag is a great product that we have integrated in our new app called WeatherRun. When paired with SensorTag, WeatherRun provides and tracks accurate Altitude, pressure and humidity. The target audience of the app is outdoor enthusiasts who need to know and plot the ambient conditions. The app can be downloaded at https://itunes.apple.com/us/app/weather-run-bike-walk-hike/id599397919?mt=8

Used the SensorTag for a recent project, developed an iPhone App that uses the SensorTag to monitor weight training, counts the number of repetitions and breaks it down into the type of movement the individual did, e.g. push, pull or curl here the link https://itunes.apple.com/us/app/weight-training-genie/id650541393?mt=8

I picked up one of these as a give away at a meetup recently. Pretty neat. The “out of the box” functionality is pretty cool, but you can also create custom firmwares. Unfortunately, going that route isn’t exactly hobbyist friendly. The needed toolchain is available as a 30-day demo, but beyond that, it is $3K and there isn’t a great open source alternative. I’d like to tweak the stock firmware so that the device is discoverable without having to press the button. Even with my meagre skills I might be able to accomplish that in less than 30 days, but… Read more »

There’s a solution for keeping the SensorTag discoverable, and apparently it’s possible to get an license extension for the IAR compiler if you just want to make one code change – http://e2e.ti.com/support/low_power_rf/f/538/t/281935.aspx

@Amit and @Klaus : Does that mean users’ need to press the button on the SensorTag to work with your apps, or did you modify the firmware and updated it via iOS?