Android-x86 project has been working on porting Android OS to Intel and AMD Desktop PC and Laptop, and just about a week after Android 4.3 has been released in AOSP, the project’s team has already managed to provide an Android 4.3 x86 test image for desktop and laptop, probably helped by the recent push by Intel to have Android device powered by x86 processor. 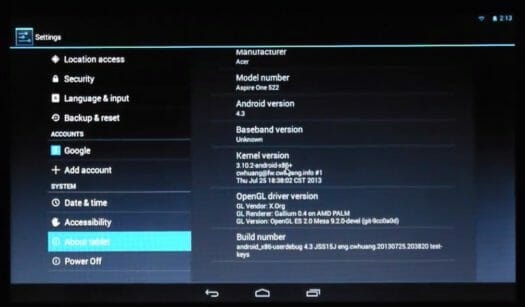 The test build (20130725) is based on Android 4.3 release (Jelly Bean-MR2 branch), and they’ve modified parts of the code to make it work with x86, especially on x86 tablets and netbooks. What’s impressive is that most of features appear to work, and they’ve almost managed to add some additional features.

The key features in this release are

Known issues are that suspend and resume doesn’t work, and there’s no superuser support.

“monstercameron” has loaded the bootable ISO image to USB driver unto his Aspire One 522 netbook (AMD C-50 processor + ATI Radeon HD 6250 GPU), and uploaded a video showing the performance on his hardware, mainly showing some surprisingly smooth 3D games and demos, and benchmarks. For example, it gets over 11,000 in Antutu Benchmark, although SD card tests could not run.

really impressive. For sure laptops on Android will rise on the next years

Will be a kick in the guts to all distros on distrowatch. Grub boot code anyone?