We’ve already got a long list of upcoming Rockchip RK3288 based Android media players, but no low cost development boards have been announced to date. We can certainly expect a Radxa Rock 2 board with the Cortex A17 processor, but it might not be the only one, as Firefly-RK3288 development board powered by Rockchip RK3288 is currently being developed by another Chinese team.

Current specifications for Firefly-RK3288 board: 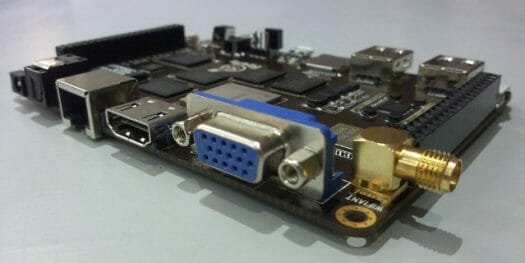 The developers told me it would be an open hardware project, but I’m not sure it will be 100% open source hardware, but at least they seem committed to release the hardware schematics, component’s placement file, and components’ datasheets. Hardware design and debugging have just been completed, and they have not reached the mass production stage just yet, which also means there’s no price information either. They will support Android 4.4 and Ubuntu for the board, and the SDKs, tutorial and hardware files will all be available from their website in August.

That website is not online yet (and I don’t even know the domain name), but the board can be found on oschina, and the development followed on TeeFirefly’s Twitter and Facebook accounts.

Apparently someone thinks the design of radxa rock is good. Our rock 2 will be based on a rk3288 som.

@Riaqn
For RK3288 it will be USB 2.0, and there’s no SATA.
They could add SATA but it would just be via USB to SATA chip, so it’s the same as using an external USB hard drive.

That VGA connector is big, blue, and ruins the cool blackness of the whole board. 😛

Looks like Radxa Rock competition? What should the customer buy? Think they will get confused, and dislike the current one day fly policy.

if this is a real open hardware. This will be a great board, and better than raxda.

Tom Cubie :
Apparently someone thinks the design of radxa rock is good. Our rock 2 will be based on a rk3288 som.

MIPI and LVDS there. If they share hardware design and give support can be a really good choice.

@Tom Cubie
They say imitation is the sincerest form of flattery! Good to know that Rock 2 is in the works. I hope the use of SoM does not cause a substantial price hike.

@Curmudgeon The price of these components (& consumer devices using them) is dropping all the time… Is an upgrade at the same price too much to ask?

Hopefully, they’ll provide better service than Tom Cubie. I RMA’d a CUbietruck back to r0ckstore in January and never saw a replacement or my $100 back. Just got the runaround in emails.

If these guys have just copied from Radxa, then they are more likely to be less inclined to provide quality support.

@Jessops
It’s not just a copy/paste, since it’s a new SoC, but they clearly strongly got inspired from Radxa Rock form factor, ports placements or so on. They seem completely new, so we’ll have to judge them over time. I doubt they will have very good support at the beginning, since they probably need the first orders to get some funds, then hire more people, etc… Many people claim their board to be “open source hardware”, but most boards in the market aren’t. But hey, it sounds good for marketing, so they claim it is anyway… Wait and see…

G :
That VGA connector is big, blue, and ruins the cool blackness of the whole board.

Apart from the cosmetic factors, the VGA connector is obstructive for those who might implement expansion boards. Compared with today’s high density connectors, the “D sub-miniature connector” is an anachronism that is not nearly miniature enough! Hopefully the Twittered layout adjustments will fix this.

I have bought many boards from Chinese companies / Solution providers / Factories / Shops / OEMs, none of them provide good technical support. In most cases.. * The sales girls speaks English and the Engineer speaks only Chinese, the non technical sales girl will have to translate the technical problem to Chinese and back and forth, by then you are tired. * There is less willingness to support, because there is no money in technical support, Where is the volume order ???? * There is nothing like a open source in China, if you need to do some changes… Read more »

@Saravana Qmaxsys
I think your analysis of the situation is spot on.

I have reason to believe that this board will be true open source hardware, with every single little detail downloadable. The engineers tell me they’ve got it this time, and of course, if they’ve got it, what a blockbuster this will be!

@Jibril The board is basically awesome, but it’s a shame that there’s no SATA with a small Storage – 8GB eMMC flash and I believe it will use the H.265 Codec, but I don’t see anything about any Audio Hardware Acceleration for use with Dolby which is so nice to have and from what I hear about ARM is to be energy efficient and from what I understand, when you use software to render either audio or video not only do you get less quality, but less energy efficient so I’m hoping this board has both Video and Audio energy… Read more »

Finally, most probably not fully open source hardware, but they’ve already released the schematics in PDF, and files showing component placements. Images for Android 4.4, Lubuntu 14.04, and Dual Boot are also available. They have placeholders for Android 4.4 SDK and Linux source code too.
http://www.t-firefly.com/plus/list.php?tid=2

@Bud Ryan
I don’t know why you asked me your problems about missing Sata port, small storage and no support to DTS and AC3 audio.
If you want these features, you can contact RockChip and explain them your requests on new chip or change to another platform (Samsung or other SOCs)…not me.

@ Jean-Luc
for you, which will be the street price of this board at launch ?

@Tom Cubie
When does it come ? What about the RAM (2GB, 4GB ?) etc… I searched around Radxa forums/wiki and found nothing.

@Nickson Yap
Taobao is OK, but eBay link is not working.

@Tom Cubie
tom cubie has a very large face to come here to sell new boards ..
First can explain:
why the radxa rock board dont work ?.
why he sells open philosophy when it is not?

@mongrol
Good news for you, their new forum version has just online.
http://www.t-firefly.com/en/
From their website, their new product FireLink, FireSmart will come to the market soon. It looks promising