HDMI TV sticks used to be popular, but as processors became more powerful, it became more and more challenging to put new SoCs in such a small form factor due to thermal issues. For example, there’s no HDMI TV stick powered by Amlogic S802 (4x Cortex A9 @ 2GHz), as even TV boxes may have troubles keeping things cool with two largish heatsinks. But the new Amlogic S805 quad core ARM Cortex A5 is more power-efficient, and Ugoos will soon release S85 model in an HDMI stick form factor. For now, they’ve just published some pictures of the board. 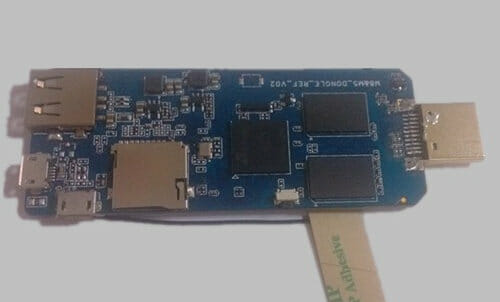 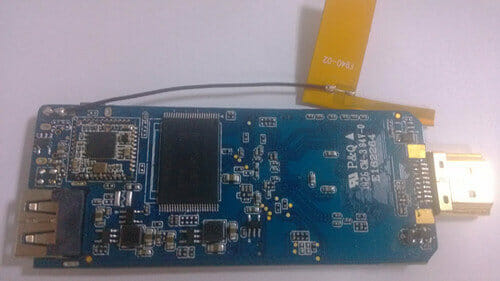 Ugoos S85 will run Android 4.4, and that’s about all we know at this stage. The latest quad core HDMI sticks on the market where mostly based on Rockchip RK3188, as well as much less popular ones featuring Freescale i.MX6 and AllWinner A31. This upcoming model will have a slower CPU performance, but a faster GPU, and support for H.265 hardware video decoding.

Still the best stick for general (non-Android) use has been the Ugoos UG802, that stick keeps on ticking, no matter what you do with/to it. 🙂

No certainty, but I’m guessing it will also be based on Amlogic S805.

Does not look to be any upstream XBMC support for Amlogic S805 yet?

When will have a dongle can have a look? will you also have the box with S805 chipset?