Software-Defined Radios (SDR) are neat little devices that capture radio signals which are then filtered and decoded by software on your PC or embedded system. The currently used radio spectrum is extremely wide from 3 to 30Hz for submarine communication up to 30 to 300+ GHz or more for applications such as amateur radio or radio astronomy. So the price of hardware needed for SDRs varies greatly depending on the frequency range supported, bandwidth, and other technical parameters. Hobbyists can use “low cost” ($300 – $400) FPGA SDR boards such as bladeRF or HackRF, or go ultra-cheap with $20+ RTL-SDR USB TV tuners. I’ve been informed there’s a development kit sold under the name “100KHz-1.7GHz Full Band UV HF RTL-SDR USB Tuner Receiver DIY Kit” based on the latter, but with extra components, on various sites such as Buyincoins, Ebay, Aliexpress, etc.. for just $33 to $45.

The problem with many Chinese sellers is that they sell development kits without any documentation, and think people will just magically find out how to use them… The picture above shows all parts included with the kit: capacitors, resistors, jumpers, headers, the USB TV tuner, an extra board, some antennas, and a white box. I first I was scratching my head thinking “how do these fit together?”. 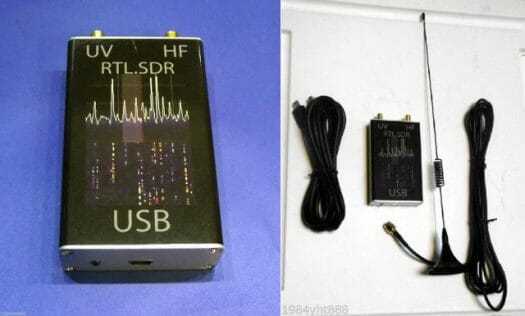 But another eBay seller seems to provide the same kit (TBC), but pre-assembled, for $55, and the pictures give a clear understanding of how it all fits together. I’d assume this is made to improve the sensitivity or increase the range of the reception, compared to a USB TV dongle-only solution. They also provide some links to Youku videos showing capture at 14.270MHz  and for AM radio, as well as links to Windows/Linux RTL-SDR applications that can be used with that device based on Realtek RTL8232U + R820T.

Looking a bit further, I found an RTL-SDR Google+ community where they also noticed the disassembled kit. Some documentation is said to be available in a document called “电视棒 套件的安装.doc”, but all links are now dead, except maybe a Google Translate version in English or German. But all is not lost, as somebody posted assembly and soldering instructions online for the kit for something that looks very similar called BA5SBA. The post of also written in Chinese, but Google Translate and the pictures should help. The USB dongle is not used directly, but you have to take out the board inside and solder it as a “module” in the opening found in the board provided with the kit.

Finally, we’ve got the assembly instructions for the kit, as well as links to software that should support it, so it could be an interesting kit to play with for those interested in SDR.

onebir thought cnx could figure it out 😉
(but is still confused: why is it worth paying 3x as much and assembling this, instead of just using a dongle like the one included in the kit?)

@onebir
It was some work… 🙂
They have two antennas, so they must have better reception for specific frequencies. You’ll probably soon get a better answer from people who are into SDR.

It looks a little challenging to solder all parts however:

“Yesterday finished all parts except connecting Q channels to RTL. That is thing I can not do with normal equipment as it require soldering 0.1mm contact to 0.5mm RTL pins.
Without that RTL-SDR works in above 30MHz little bit better then before disassemble (direct rtl_sdr connect to PC) as filters and power stabilizers do their job fine. Now I am looking for someone to connect Q channel for HF signals and finishing enclosure. “

ah, ok… I have misunderstood your question…
With only the USB TV tuner the LF frequency are not readable…

yes, with this kit you gain LF, MF and HF (100KHz-30MHz), shielded alu case and some additional power filtering
$20 sounds good for assembled and tuned box. Like cnx said there is one tricky connection directly to one of Realtek pins, plus there is filter tuning (need spectrum analyser for that one).

@rasz_pl
Thanks – looks like this could be a good option for reception only in the LF, MF and HF ranges (particularly as the existing hobbyist options don’t cover the first one (or two?) out of the box)…

It looks like 100 KHz to 30 MHz is mainly interesting for AM radio, and amateur radio. But they are also other applications:
http://en.wikipedia.org/wiki/Radio_spectrum#Amateur_radio_frequencies

For HF frequencies I would think you would need to use something MFJ 1020C .

Hi all From the UK here so bear with me as I’m not too hot on jargon busting, there may be (almost certainly) ‘stupid questions’ to follow 😉 I have just bought the pre assembled version of this dongle via eBay, (expensive here at £40.00 :-O ) but for someone in my predicament, good value as purchasing the equivalent hardware would run into several hundreds if not thousands of £’s so…… As expected, I’ve not been able to find any support for setting this up but in my nievety thought I could probably set it up myself. yep, i really… Read more »

I am on the second one of these, returned the first because I thought it was broke.
Second supplier.
Still no HF.
Still crap.

The main UV part works ok but you can do better for £6 with a basic dongle.

THEN you can pick up some HF broadcast!!! (You might do better if you have a good aerial!!)

Can just see Radio4 LW on the spectrum of HDSDR but not readable.

Just tried a mini whip, pa0rdt not much better but copied some SSB on topband.

I need a BIG antenna outside to overcome office QRM!

Bought from a website: radioddity The instructions are not with it, and you have download and figure out how to make it work. All in all, you need to order sma to whatever coax adapters you need to get to an outside antenna. I used sma to so239 adapters. With an outside antenna it picks up signals surprisingly well. The antenna that ships with it is useless unless you are just interested in vhf/uhf etc local transmissions. I have listened to vhf, uhf and hf with no problems with my outside wire antennas. At present, I have only made it… Read more »

Does he mean “sensitivity” ?

“But an other eBay seller seems to provide the same kit (TBC), but pre-assembled, for $55, and the pictures give a clear understanding of how it all fits together. I’d assume this is made to improve the “SENSIBILITY” or increase the range of the reception, compared to a USB TV dongle only solution. ”

@RadioHead I purchased of those 100KHz-1.7GHz full band UV HF RTL SDR boxes, works for me. Using SDR# (sharp) with Q branch setting, outside 1/4 wave HF radio on good coax.. with adapter. seems to pick up AM Radio well, and also shortwave. But as I have only fiddled with it once it was hooked up. for about 2 hours so far I am still learning how to use. The one thing i noticed is (for me) is that the HF part seems to peta out at about 21 mhz or so. from memory. but from 200 kz up to… Read more »