Most Android TV boxes come pre-loaded with XBMC, but Rippl-TV goes a step further by replacing the Android home screen, or other common found launchers, by XBMC which is used not only as a media center, but also to launch apps, access the settings, and so on. Everything is done within XBMC. The hardware is very similar to SZTomato / Enybox M8, and Shenzhen Tomato appears to be the company behind this project, or at least promoting it. 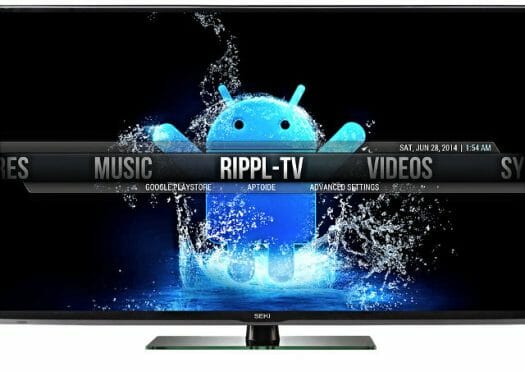 The box runs Android 4.4.2, and a thread on Freaktab seems to confirm it’s the same hardware as the “squared M8”. During my review of the M8 (aka EM8), I found it to be a bit unstable, but since then, I’ve had several people report they were unable to play complete movies in XBMC, as it would stop about 30 minutes or so, even with the latest firmware. It seems odd to launch a new product based on a platform with stability issues, or maybe I and others were unlucky and received bad samples…

Nevertheless the interesting part is the UI, and you can see how everything is controlled from XBMC in the video below.

It might also be possible to do the same by yourself, by installing add-ons, and automatically starting XBMC at boot time. I’m also not convinced of the usefulness of having XBMC as the main UI, but it’s probably just a matter of taste.

The box is not available for purchase by individuals just yet, and the company is now looking for distributors (MOQ: 500). You can find more information on Rippl-TV website and their Facebook page.

“Interested in Pivos building a custom firmware for your organization? Possibilities include, but are not limited to digital signage, hospitality, content distribution, and IPTV service providers.”

Based on what I know, it’s not Pivos product at all (I’m 99% sure). Keeping in mind that Matricom used same low quality factory hw for G-Box Midnight and G-Box MX2 boxes and that they after many verbal fights released their modified XBMC sources on their github (which they prepared to be built with android sources), I’m pretty sure Matricom is behind this project.

@Stane1983
Very possible, because SZTomato seems to be in contact with one person from Matricom (and asked me too many questions) a few months ago…

Well since Matricom is infamously know for violating the GPL license XBMC source code is bound under that would not suprise me the in the least.

https://www.youtube.com/watch?v=MKNM2jrMVa8 really fluid video there of it running, pretty impressive. Can’t wait to see a review and hope it does not fall from the same mistakes as the other 30min only devices on playback.