There are many upcoming Rockchip RK3288 based devices, and in the listing the CPU frequency varies from 1.6 GHz to 2.0 Ghz. so it’s difficult to know exactly what to expect. Ugoos has done some testing with their UT3 board measuring temperature after Antutu benchmark for different CPU clock frequencies and fan/fanless combinations. 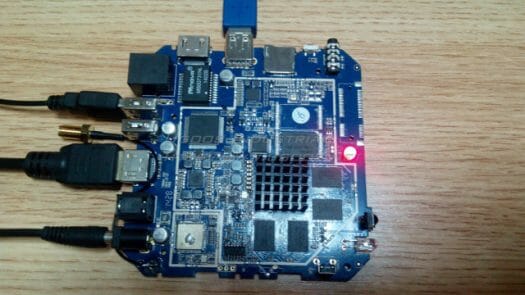 The board comes with a rather tiny heatsink which may explain some of the results below. They also added a small fan on top in about half the tests to compare the temperature against an heatsink only solution.

Without further delays let’s go through the results:

So while it’s correct to say Rockchip RK3288 can reach 45,000+ points in Antutu (resolution: 1920×1080), there likely won’t be any fanless solutions that will be clocked at 2 GHz and achieve that type of performance. From this test, it even looks like the new Rockchip TV boxes are likely to be clocked at 1.6 GHz, unless other companies select larger heatsinks. 38000 points is still a very respectable score in Antutu.

There are some products is the wild right now, notably with Nagrace HPH RK3288, and one user reports an Antutu score of “only” 31.328 points, but considers the firmware very fast, and with good XBMC support, but it currently lacks Google Play support, and one of the launcher is in Chinese only, so it’s not quite ready for prime time. If you want one, a group buying is organized via Freaktab for $180 including shipping, This is a version with 4GB RAM, 32GB Flash and HDMI In.

Antutu is not a realiable source as can be hacked, but you can see how the board boots quiclky and how pass the antutu test.

@Javi
From this month, Rockchip changed SoC 3 times, i think you know it very good. Ugoos have more information in their blog

Rockchip is launching the RK3288 from six months ago… and did not finish yet. Sometimes I think we will see the Allwinner A80 TV Box before.

IHMO I think that Ugoos UT3 tests are done with nonsense… the heatsink area is too small… a 4×4 fan on it is useless (a lot of noise and no CFM).
On the PCB should be applied a larger heatsink with at least an 8 x 8 cm PWM fan (velocity propotional at CPU/core load)

Then will be correct to say: “Intel overclocking with azote big nonsense, best way is using 1meter х 1 meter heatsink” I am only mean, it is not stock solution, using only for testing and checking abilities of SoC 🙂

@Pumba
that you wrote is your opinion (max respect) but there is an abiss between air cooling and azote instead…(and gap from little overclocking and elevate one)
For me (IMHO) using of a tiny heatsink and an useless little fan is the wrong way to try to achieve the 2 Ghz clock stable.

I completely agree with Jibril. If you can remember even rk3066 had huge radiator on it which covers half of a side of PCB i.e. in MK808(B). Just take a look:

It covers also RAM but I can’t see anything against same for rk3288.

The laws says “the more contact with the air the better heat sink”. – Square centimeters in “contact” with the air is the most important probably. That is why heat sinks have those extruded “legs” and they are not a single block – Aluminium 1050A or 1060A aloy are probably the best materials (205 W/m°C). Copper is “faster” (400W/m°C) but copper is heavy, expensive and difficult to make (and can not be extrudded), also it will depends on the square cm too… so probably alumium is better for this product – If you have a fan, also must think about… Read more »

@mac In considering heat sink requirements it is important to first understand the time frames of the expected thermal loads. For dongle devices such as MK808 being used as they were designed to be used, the booting-up process may be the highest sustained load that will ever be encountered. Any subsequent interactive load peaks will generally persist for only a hundred milliseconds or so at a time. To absorb the short thermal surges that occur during interactive use, air cooling may be less important than having a heat sink with significant thermal inertia closely coupled to the SoC. A chunky… Read more »

It might be possible to set the max frequency in the DTS files without rebuilding the kernel.. I understand that’s what they did for Amlogic S802.

I had a couple of thoughts on this interesting test and its results; thanks for bringing it to our attention! I agree that proper heat sink size and design as well as good case ventilation will be key for good performance and stability of RK3288 and similar boxes; the pictures of current case don’t bode well on that front, with no apparent thermal design in place (top/bottom/side vents designed for good thermosyphon air flow). Moreover, I was really struck by the likely need for a fan if the RK3288 is to be run above 1.5 Ghz or so. The RK3288… Read more »

@pete Unlike RK3188, RK3288 has an on-chip temperature sensor and, in my opinion, this feature should play an important role in enabling adaptive thermal management by clock regulation without resorting to the use of fans when the device is intended primarily for interactive use cases. For devices intended for use cases with more sustained loads, a fan might be included for use when the need is indicated by the on-chip temperature sensor. Because Android has been aimed primarily at interactive mobile applications I suspect that the designers of the many kernel clock governors have focused on achieving best responsiveness and… Read more »