Following up on yesterday’s Android rear view mirrors (ARVM), where I and others mentioned safety of such devices in comments, it has been brought to my attention that there’s a possibly safer alternative with Navdy, a 5.1″ Head-Up Display (HUD) running Android 4.4, that’s placed right in front of your eyes on the top of the dashboard, and coming with both common and different features compared to ARVM. 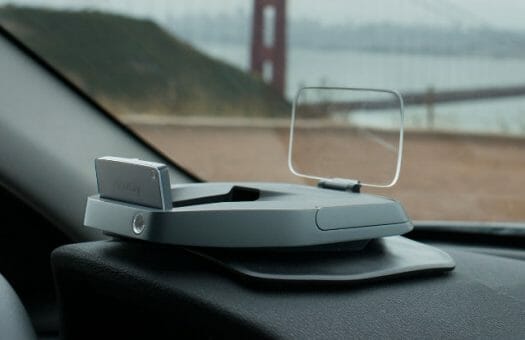 Navdy can also be paired with your smartphone (Android or iOS) to access your apps and data. It is fully controlled by gestures and voice input, and I could not see any buttons on the device, which allows to answer/give calls, read/write SMS, control your music, and drive with GPS instructions right in front of your eyes. To better understand what Navdy does, watch the promo/demo video below.

The apps are not displayed as-is on the HUD, but a simplified version is shown to make it more HUD friendly. Compared to Android rear view mirrors, it has the advantage of sitting right in front of your eyes, it does not hide anything on the rear view mirror, supports gesture control, and has built-in support for ODBII, but does not come with cameras for DVR functions or parking assitance, and it looks like you may only be able to run a subset of Android apps.

Thanks to Connolly for the tip.

Well not bad but while I can’t say if it’s expensive or not I can say that I’d pay no more than $100 for this. Got a HUD display from Ali which I’m curious about.