XBMC, soon to become Kodi with version 14, is now supported in Linux, Windows, Mac OS X, Android, and iOS. But Kodi 14 may soon support Tizen, as Phil C., a Tizen developer, ported the alpha version of Kodi 14 to Tizen 3.0, and showcased it on an Intel “Bay Trail” NUC powered by Intel Atom E3815 single core processor. 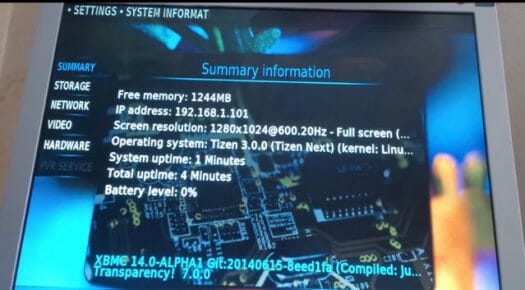 Intel 3815 NUC is officially supported by Tizen and an image is available for download, so most of the work was to build Kodi 14 Alpha, install required packages, and configure some scripts. The video below shows XBMC/Kodi 14 UI running on Tizen 3.0, and a video played from YouTube, and after about 3 minutes, he explains how to modify the BIOS to have the system boot and work properly for the rest of the video.

If you happen to own an Intel E3815 NUC, but it could also work on a regular PC with Tizen installed, you can try this image by yourself by following the instructions below:

For faster performance, you may also consider copying the USB flash drive files to Intel NUC’s eMMC in /usr/local/ directory.

@memleak.in
This demo was done in June.
I think Tizen is really struggling as a smartphone OS, but for the other uses (IVI, wearables, IoT…) development is still going on.

Someone ported xbmc to meego years ago too, interesting but with no Tizen set top boxes on the market it’s nothing more the a curiosity.

Tizen is DOA, its only purpose is for Samsung to have something to threaten Google with.