Mozilla promised $25 smartphones running Firefox OS based on a Spreadtrum Cortex A5 application processor earlier this year, mostly for emerging markets. Thanks to Intex Cloud Fx smartphone selling for 1,999 Rs ($33) in India, we’re almost there. 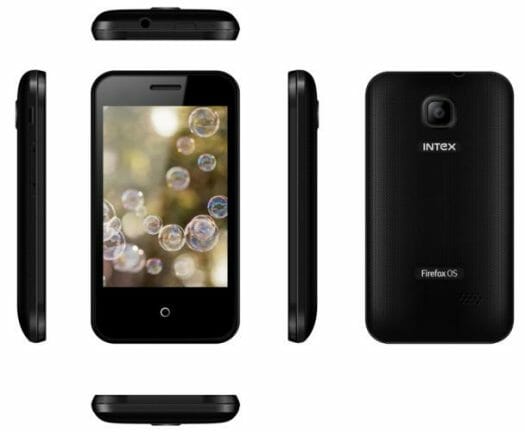 The phone is said to come pre-loaded with Facebook and Twitter apps, some games, Whatsapp is supported via third party app/service, and it can handle English,Hindi,and Tamil languages. The phone comes  with earphones, the battery, a travel charger, a data cable, a user’s manual, and a warranty card. The memory and storage will certainly limit what you can do, but this smartphone is priced like a feature phone, so certainly looks value for money.

If you are based in India, you can get it from Snapdeal.com for 1,999 Rs with free delivery. I usually mention the device should eventually show up on Aliexpress, but this smartphone appears to be manufactured in India by Intex. The company plans to sell 500,000 unit this year alone.

Via Liliputing and The Indian Express.

We only have one planet. Instead of making new low-end phones, why can’t we repair/reflash/reuse all the obsolete (but working) phones that have been put into the trash over the last 5 years ? Those might be too weak for Android today but would already have similar (if not better) specifications !
It’s a shame it’s so hard to get proper kernel source-code (board files, device-tree, drivers) from many manufacturers (especially small chinese ones using MTK chipsets) so that we could give a second-life to obsolete smartphones…

Indeed this is so very true. Old PC are still usable and I have several that I’m still using but for old smartphone it’s much harder because of their ARM SOCs.
With 64bit ARM though we might be getting something closer to X86 compatibility when you just install a new OS and it works without the need to have the specific source code and all that.

@ade
I assume it may cost more to repurpose old phones than make new ones.
We live in a world where it’s often cheaper to buy new than to repair something.

We must also understand the manufactures and their profit. If we reuse old phones we would not buy new ones. Right? 🙂