Earlier this month, I discovered MIPS Creator CI20 development board based on Ingenic JZ4780 dual core MIPS processor thanks to one of my reader.  Imagination Technologies has now launched the board, which will run Debian 7 first, soon support Android 4.4 and others Linux distributions, and the company places their MIPS board as a competitor to the popular ARM based boards such as the Raspberry Pi and BeagleBone Black. This is the first board part of Prpl initiative for open source Linux and Android software for the MIPS architecture. 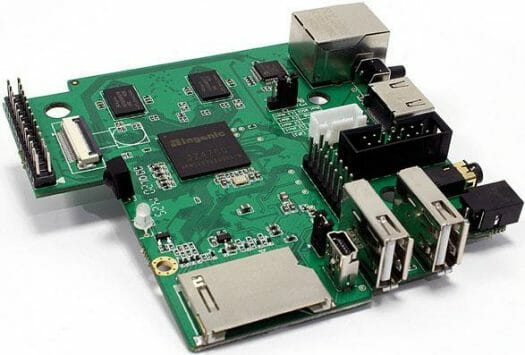 As a reminder, I’ll list the hardware specifications again:

One thing I did not mention the last time are the multimedia capabilities of the Ingenic SoC, as it can handle codec such as MPEG-4, H.264, VP8, MPEG-2, and RV9 thanks to the video hardware, “making it ideal for HTPC enthusiasts” according to Imagination. The Linux source code  (3.0.8 and 3.16 kernel) is currently available on github and Imagination plans to up-streamed support to mainline. Graphics support includes Xorg-compliant OpenGL 2.1 and OpenGL ES 1.1/2.0 drivers, which means Linux distributions available for the board should have 3D GPU acceleration. The complete documentation is available on eLinux. 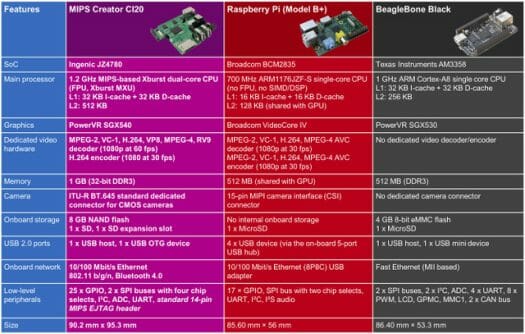 Based on the comparison table above, MIPS Creator CI20 are significantly higher than Raspberry Pi, and even BeagleBone Black, and the board size is about double, so it’s unlikely it will compete on price with either, unless it’s sponsored. Its specs are more akin to the Cubietruck (except for 2GB RAM, SATA support, GbE…) which sells for $89, so something between $70 to $80 could be expected.

With regards to availability there are good and bad news. The bad news is that you can’t buy it right now, and they haven’t announced the price yet. The good news is that if you are involved in an open source project, you may be able to get it for free by requesting one. Eventually MIPS Creator CI20 should sell via Imagination Technologies e-Store.

Please post status update if any XBMC.org developers gets accepted!

Hope this time the “request for free” is not like the Windows Developer Program for IoT (Galileu board), that I’m still waiting for Microsoft to deliver the goods… 😉

@JotaMG
The Microsoft story is a little different. After the application they said “thanks we’ll send the kit soon”, which turned out to be a blatant lie for most people.

Imagination guys make it clear they will only select relevant projects.

After the application they said “thanks we’ll send the kit soon”, which turned out to be a blatant lie for most people.

So you mean some people had received the kits?

@JotaMG
We have the boards and we are ready to send them. The only thing that we have to do now is sort through thousands and thousands of project proposals which might take some time. We will start the process as soon as we can.

@Alexandru Voica
Are you planning to add OpenMAX(VPU drivers) and wayland(GPU drivers)?

How does the FPU in this chip compare to ARM NEON?
Is the doc for the h.264 encode/decode engine open?

I can’t locate the user manual for the chip, but it should around somewhere since all of the kernel source has been posted. Can you add a link for it on the product page next to the datasheet link?