When Cubietech announced the availability of the Cubieboard2 last week, some people seemed disappointed it only came with 1GB RAM and no Gigabit Ethernet. We already knew a board called Cubietruck was in the work with those features, but work has gone faster than I expected as pictures of the Cubietruck board are already available.

Beside the extra RAM and Gigabit Ethernet, you also get built-in Wi-Fi and Bluetooth, support for Li-battery, a VGA connector (instead of requiring an external board), but you apparently lose the line in connector, and have less I/O pins available which may be explained by the extra features. The Cubietruck is slightly larger than the Cubieboard(2).

The good news is the board seems to run Android fine, or at least boot to Android. 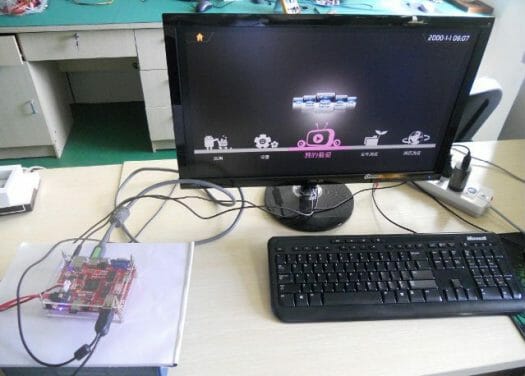 As for the Cubieboard2, you can also expect several Linux distributions to run on the device. Nevertheless the board is still under development, and availability and pricing information are not available, but I’d expect something like $79 for the 2GB version of this board.

@mj
Thanks. Actually 2 typos in this sentence… Corrected.

Thats a awesome upgrade , Even i got VGA so that I don’t have to Spend in front of TV anymore, instead use my normal monitor.

“TVINx4” – any details on this? Analog video? OS support?

That looks awesome, I only a bit reluctant because AllWinner didn’t help XBMC developers with VPU.

somebody knows which user interface is seen on the picture?

What about Linux kernel ? any hopes at all for the A20 ?
I would loved to add it to my Pogoplugs nases, just need a proper case (waf, no transparent acrylic) and Linux kernel 🙂 .

@myfoolishgames
Yes, the Linux kernel source is already available, and Linux images can be downloaded for Cubieboard 2.
The links are available in that post: http://www.cnx-software.com/2013/06/19/cubieboard2-powered-by-allwinner-a20-is-now-available-for-59/

I’ve seen that post but missed the update, so this is great news.

The board is shipping now and can either be called CubieTruck or Cubieboard3 – http://cubieboard.org/2013/10/30/cubieboard3-cubietruck-is-all-ready/

Maybe you can do Cubietruck vs Radxa comparison? For what applications does the Cubie’s SATA make it superior? How is Linux shaping up on Radxa 等等

Cubietruck is even on DX: http://dx.com/p/cubieboard-cubieboard3-a7-cubietruck-dual-core-a20-development-board-w-2gb-ddr3-memory-hdmi-vga-259524?Utm_rid=93072394&Utm_source=affiliate