Armada Mach 8 is an Amlogic S802 based TV Box apparently based on M8/EM8 hardware, but instead of running Android, it comes with XBMC Linux. It’s unlikely a quad core media player brings much performance over a dual core media player with XBMC Linux, but Amlogic S802 adds 4K video playback compared to Amlogic AML8726-MX. One of the main advantages of Linux compared to Android is support for automatic frame rate switching depending on the video you are watching (24Hz, 50Hz, 60Hz…), in order to avoid regular skipped frames when the video frame rate does not match the video output refresh rate. 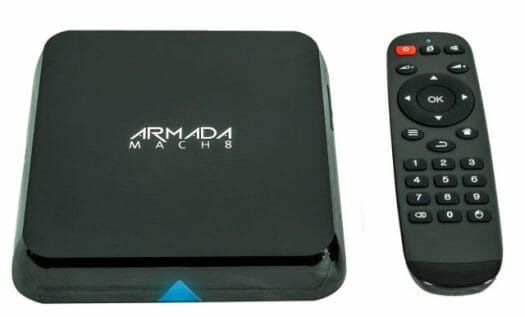 Let’s double check the specifications to confirm they are indeed the same as Shenzhen Tomato / Enybox M8, except possibly for Bluetooth:

The firmware is what differentiate this box from the Android ones. Many people have reported problem with XBMC Android in their M8, so hopefully the Linux version may bring more stability. If the listed specs are correct the box will decoded 4K, but only output up to 1080p, so there’s no true 4K output with this box, which by the way is also the case for all ARM based Android TV boxes on the market at this time. You may remember XBMC Linux (Beta) was released for the M8, but the firmware used in Armada Mach 8 looks much different with a custom skin, and some extra features such as OTA updates, “Cloudword installer” to make add-ons installation easy with just a keyword/code, and “Total Installer” to search for add-ons.

You can now get an Android M8 for about $85 to $100, but XBMC Linux based TV Boxes are usually more expensive, and Armada Mach 8 Pure Linux is not exception, as it that goes for $129.99 in TheaterInABox or Amazon US.

wondering if there is support for usb tuners and pvr live tv feature.

Actually there is a big difference in processing power between the Amlogic S8 series and the old MX series, the CPU/GPU affect XBMC in a variety of areas outside of pure video playback, UI performance, library, skins, PVR etc.

However that this comes from well out of nowhere does not inspire confidence, if the device was more open and just say here install Openelec, GeeXbox or OSMC on it and off you go that would be better instead of another custom linux distro.

I believe the Ttonsmart Vega S89-H can decode as well as output 4K over HDMI. It is also based on S802

I think croniccorey works on this XBMC linux build & box.

Unless there is support for a traditional window manager and productivity applications: LibreOffice, GIMP, web browser etc the term, “pure Linux”, is quite contrary to my expectations. Perhaps they should call this “Linux for Leisure”.

@Gabe
True and thats why I renamed my XBMC Linux to AMLinux.

@Curmudgeon
Window manager, productivity apps, app store…. you’re talking about full feature Linux distribution like Ubuntu or Debian. There’s difference, pure Linux can be only kernel + some specific workflow or some sort of shell (bash for example). Try to install Arch Linux for example and you’ll see what you will get after initial, minimal installation 🙂

@Ganesh @ AnandTech
There are several Android TV boxes that outputs 4K including Vega S89-H. However, if you play a 4K video or display a picture, you’ll notice it will not be 4K quality, because before being outputted the video/image is downscaled to 1080p or whatever UI resolution is used with the box. I can’t confirm that myself since I don’t own a 4K TV, but this happened with older Full HD Android TV boxes with a 720p UI.

@Jean-Luc Aufranc (CNXSoft)
I myself cannot confirm how real output looks like, but I can confirm (based on Amlogic source code) that M8 does not output 4K FUHD resolution (which would be 7680×4320) but outputs UHD resolution (3840×2160).

Would be nice if this linux XBMC could be installed in the EM8, though perhaps they are not exactly the same machine.

Does this device support HDMI-CEC? I like the included remote, but would prefer to use my TV remote instead.

@Harley
Thanks for your very lucid and helpful explanation. I hope these people will make it very clear that they are selling a software appliance that is dedicated to the recreational XBMC application to the exclusion of any other use. I would normally expect more open-endedness in a product that makes a feature of the Linux name.

Hello All, First let me say I love this site and get a ton of good info from here. LOTs of it come from all your good comments. I understand the desire to put a JeOS on these devices and have done that in the past, but all my boxes (quad-core) are running android OS. The reason is the boxes are powerful enough now to run that OS and render all videos. I dont run 4K but do most of my movies in BR and never have a problem. Although I did have to recently find the right combination of… Read more »