The Little Black Black Box (TLBB) is an set-top box running XBMC powered by AMLogic AML8726-M3 with 1GB RAM, 4GB Flash that comes with a dual sided RF remote control. The device became available for pre-order in April, and the first customers have started to receive the media player, one of them (flipfoelyfe) has uploaded a video, and posted some pictures. 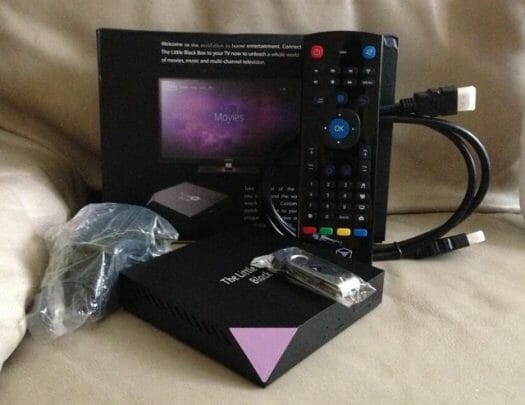 After initial issues setting up Wi-Fi (A bug seems to prevent the use of long passwords), his tweets about the device are rather positive, and he uploaded a short video demo showing Sports-a-Holic plugin playing a live NBA match, and a ESPN Boxing program.

Whereas you had to pre-order and be patient for the first batch, LTBB is now available on Amazon for $129.99

. Considering it also includes a dual sided RF remote control with a QWERTY keyboard, this single core set-top box is about the same price, or even a few dollars more, than Android dual core media players running XBMC such as G-Box Midnight MX2 or Tronsmart Prometheus. But if you’re looking for a device that runs exclusively XBMC, this may be the only media player that ships with the Linux version by default.

Thanks to CSilie for the tip!

Check out the video demo of the interface: http://www.youtube.com/watch?v=5tUH6FlLgRg