Farnell/Element14 has quietly announced Lark Board from their subsidiary Embest Technology in September. The board is powered by an Altera Cyclone V ARM Cortex-A9 dual-core + FPGA processor with high speed transceivers, runs Debian 7.4, and targets medical instruments, video surveillance and industrial control applications. 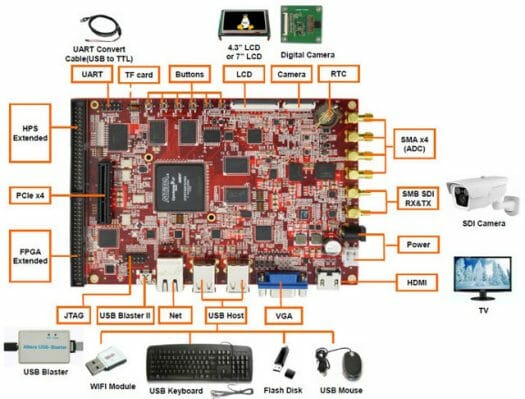 The company provides a binary image and source code based on Debian 7.4 with u-boot 2013.01.01, and Linux 3.10. The board can boot from either a micro SD card or the eMMC. Documentation includes a user’s manual, a quick start guide, schematics (PDF), sample applications, as well as datasheets for the SoC and other components.

Lark board is available now for $799 on Embest website where you can also find documentation, the OS image and source code. It’s also listed on Newark/Element14 and Aliexpress for around $900.

For $299 man can have Arrow’s SocKit with the same FPGA device.

http://parts.arrow.com/item/detail/arrow-development-tools/sockit#czJn has a similar board with same processor for $299 as kcg points out above.

@kcg
@Ray Knight
I wonder why the price difference is so large.
The FPGA SoC is sold for $340 on mouser, digikey, and even Arrow, so maybe Sockit is sponsored.

Still this does not fully explain the massive price difference between the two boards.