Back in May, Intel and Rockchip announced a partnership to develop 3G and LTE “Sofia” SoC for mobile devices, a few months later, Rockchip VP posted a picture of dual core development board (6321 solution) on Weibo with Rockchip and Intel technology, and the companies have showcased solutions based on XMM 6321 during the Hong Kong Electronics Fair. 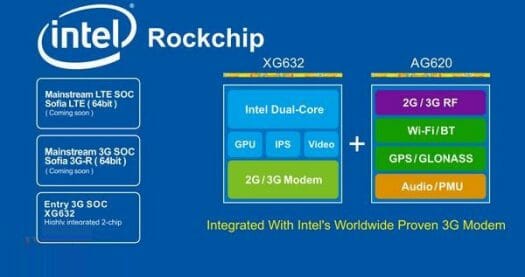 Intel XMM 6321 appears to be a two-chip solution comprised of:

XG632 will be the first processor from Intel and Rockchip collaboration, but it may not be part of “Sofia” family. with quad core 64-bit Sofia 3G-R and Sofia LTE SoCs coming at later date. XG632 is for entry-level smartphones (<$30) and tablets (<$40), whereas the upcoming Sofia SoCs will be seen in mainstream devices.

Charbax filmed Rockchip solutions at Hong Kong Electronics Fair, and he claims XG632 is actually a dual ARM Cortex A5 processor, but this is not consistent with the diagram above showing an “Intel Dual-Core”, and I could not confirm it with any other news sources, so wait and see.

I think possibly the whole ARM SoC might be designed by Intel’s In fine on branch and they didn’t know how to use it, they didn’t want to release it as an “Intel processor” ergo they made the deal with Rockchip “would you please sell our ARM processor with In fine on baseband for us? You can keep half the revenue” or something like that. Surely Intel as a giant, has teams designing ARM processors all the time, which they use to compare and to give the CEO a choice of going with ARM solutions any time he gives the… Read more »

@Charbax
I had read Intel had an ARM license, but I did not expect them to make ARM based mobile SoC, even via a third party. I did not think ARM would be pleased to have Intel look at their IP…, and this also opens the door to potential litigations…

Anyway, once the phones/tablets start selling, the truth will come out.

@Jean-Luc Aufranc (CNXSoft)
Well Intel did acquire Infineon and Infineon had some ARM SOCs on the way that would use their 3G modem. These are what’s know known as Sofia. They might have replaced the ARM cores with Atom ones but I’m 100% sure they can’t get AROM in 30-40 dollar devices.
Maybe Intel has some other X86 cores that they’re going to use ? The only thing that comes to mind is the Intel® Quark SoC X1000 Application Processor used by the Intel Galileo.

@Jean-Luc Aufranc (CNXSoft) My guess is Intel has several ARM licences that are being kept secret (I think it is not mandatory for ARM and licensees to announce their licences, those licenses can stay secret for as long as the licensee wants them to remain secret, which I think is especially easy before large volumes of processors get shipped, basically what I think is Intel has all the ARM Licences they can get and they ship little if any ARM processors (only through their Infineon branch renamed Intel Mobile Communications branch)) and that ARM has no problem with Intel looking… Read more »