Yet again, sellers are trying to get rid off their old stock, and today Rikomagic MK02 IIIS HDMI TV Stick powered by Rockchip RK3066 sells for s, but if you miss it, you can also buy from another seller for $17.99. Both prices include worldwide shipping, and the sellers have good feedback. 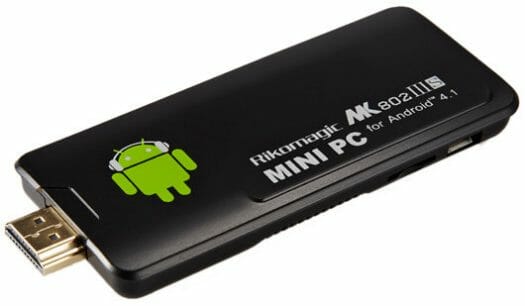 The package includes the mini PC, a USB cable for power, an OTG adapter, a short male to female HDMI cable, and user’s manual. It’s said to run running Android 4.1.1, but it could actually be Android 4.2, and Rikomagic released firmware on November 2013 with Android 4.2. Two versions of MK802IIIS are listed on Rikomagic firmware page, so I’m not sure which one it is. This dongle also supports PicUntu I/O if you want to run a Linux desktop distribution.

Thanks to Gabe for the tip.

We are Rikomagic company, we can promise this store is not our authorized reseller,their goods is not ours!
We wont provide warranty service for those units sold by this online store!

Rikomagic says: Dont’t buy this device for a reasonable price. Buy the overpriced one in our Shop 🙂

do u think 17.99$ for RK3066 dual core,1G DDR, 8G flash with blue tooth,with free shipping is reasonable price? do u know their components? you can image the cost~
I found their listing is removed, if their goods is original,and if they are “REAL” and “SERIOUS” seller,why they removed this liting?

Which listing are you talking about? I see a seller with a 7.018 score and 97.8% positive feedback. It looks very SERIOUS for me.

I means the link in the article, this usd17.99 item has been removed, cant order any more.

@Rikomagic
@Klaus
Both these sellers have good ratings, so I don’t think it’s a scam. Most probably they had some stocks they wanted to get rid off, which is why they temporary offered it for an heavily discounted price.

f**** i missed this one. My RSS update failed due to an issue with my DB server!

No worries folks, such fads happen every week on aliexpress. Then they say it was a mistake and refund, and you can’t even leave negative rating.

If you look for that price points on that hardware, you still have few days to fund Firefox Matchstick, which maybe even will have its software supported for some time.

The little more expensive one is also gone: “Sorry, this item is no longer available!”

Without a remote being included this is not that cheap.

Better a media player with a remote for under $30 🙂

Just got it 🙂 everything seems fine