EZCast wireless adapters are now pretty common, allow you to display and stream documents, pictures, music, and videos from your smartphone or computer to your big screen TV, and sell for about $20, but the vast majority come with a 2.4 GHz Wi-Fi module, which may be a problem if your environment is crowded with other 2.4GHz routers. Vsmart V52D fixes that, as it includes a dual band Wi-Fi module supporting both 2.4 and 5.0 GHz frequencies. 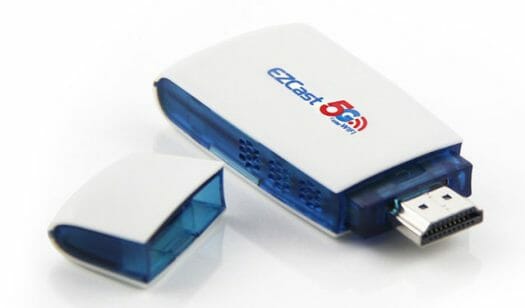 The other part of the specifications remain the same:

The device ships with a USB cable for power and with and external antenna, as well as a user’s manual for M2-500, which might be the manufacturer name for this dongle. It’s not an EZCast Pro device, because it only features 128 MB RAM, so advanced features like split screen and multiscreen won’t work.