Now EZCast dongles are my preferred type of Wi-Fi display dongle, although there are not perfect, they support Android, iOS, Windows, and Mac OS, and beside the proprietary EZCast protocol, they also support Miracast, Airplay, and DLNA. However, they cost between $30 to $40, and if all you are after is a cheap DLNA and Airplay adapter, you could get iPush Hi768 for $21.99 including shipping. This device also features an AV output (composite + stereo audio) to mirror your phone on your old TV. 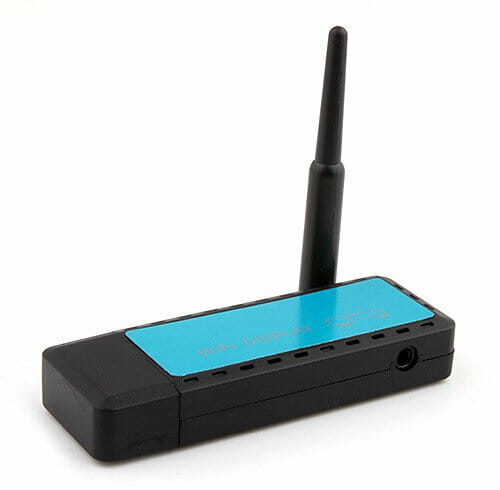 Here are the specifications as listed on Pandawill and some other sources:

The dongle comes with a USB cable, an AV cable, and a user’s manual. I understand there are two versions of the hardware: one with 64MB RAM for DLNA only, and a 128MB RAM version that supports Airplay too. Pandawill also mentions “Miracast for Android 4.2.2 (on MTK6589, MTK8389, AllWinner A23, A31S, and others)”, but the few other sites selling iPush Hi768 do not mention Miracast at all. The internal hardware seems similar to iPush D2 which also came in two versions (64MB / 128MB RAM), with DLNA working on both, and Airplay only working on the 128MB version and with some caveats. ATV6003 is supposed to support Miracast, but it’s unclear whether actual devices based on this SoC sell with Miracast enabled. So whenever you buy an iPush TV dongle make sure you double check and the amount of memory, and supported features.

Other iPush devices, but for now not Hi768. also sell on Aliexpress for $22 and above.

Thanks to Alex for the tip.

A DLNA to analog adapter for 22? Finally. Those were priced ridiculously so far.

@onebir
Nice find, and it does really seem to support Miracast: http://v.youku.com/v_show/id_XNjE1NTUyNjMy.html

@Jean-Luc Aufranc (CNXSoft)
These must be getting on for as powerful as Raspberry Pis… Interested to know what else people manage to do with them – maybe they could run a Linux desktop system?

@onebir
There’s no microSD card slot, no usable USB port. You’ve got a Linux device with an HDMI output port and Wi-Fi, with 128MB RAM, and 16MB Nor flash. So I think the possible applications are quite limited.

I think Freelander AP20 has 256mb RAM, but I completely forgot about the ports etc :p