Hardkernel is known for their low cost Exynos based ODROID boards such as the $59 ODROID U3 board based on Exynos 4412 quad core SoC, and with ODROID-XU3, they also have a more powerful Octa-core Exynos 5422 board which sells for a premium price of $179. The company has now decided to offer a cheaper version of the board, which they call “ODROID-XU3 Lite” and lacks DisplayPort, the current and voltage sensors, and uses an Exynos 5422 processor clocked at 1.8/1.3 GHz instead of 2.0+/1.4 GHz for the original board. Price? A cool $99. 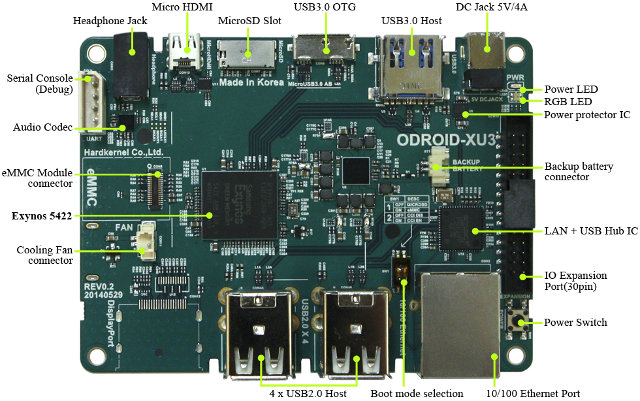 You can run Ubuntu 14.04 with OpenGL ES and OpenCL support or Android 4.4.x both on top of Linux kernel 3.10 LTS. ODROID-XU3 achieves 50,313 points in Antutu 5.1, and although the core for the Lite should be slightly lower due to the lower operating frequency, it still means you’ll get one of the fastest devices available.

ODROID-XU3 Lite comes with a 5V/4A power supply, an enclosure, a heatsink, and a fan, just like the original version, and you can purchase it directly from Hardkernel, or if your live in the US or Europe receptively via Ameridroid or Pollin Electronics. Bear in mind there;’s no storage, so you’ll either need to use a (Class 10) micro SD card, or for even faster performance, purchase one of the eMMC module for an extra $39 to $79.

Awesome! However, in the US the board will retail for a few dollars more than $99 to defray import costs, and the US distributor is “ameriDroid”, not “Ameroid”. 😉

There isnt SPDIF audio output 🙁
buying it for another 15bucks isnt solution…
http://hardkernel.com/main/products/prdt_info.php?g_code=G140081048224

Seems Odroid having same issues with implementing gigabit as default adapter as Amlogic and Rockchip , a big + for Allwinner A80 .

I love this board can run the OpenGL ES 3.0 application on Ubuntu.
http://youtu.be/tE5wJzItppU?t=1m14s

@ovidiu
That’s because there’s no Ethernet support in Exynos 5422.
Gigabit Ethernet is working OK on one Rockchip RK3288 platform (Orion R28), but the others I tried seem to have issues.
No GbE on Amlogic at all, at least for now.
Allwinner A80 GbE is also working but performance is not so good. I’ve received a new power supply, so I’ll perform more tests on OptimusBoard soon.

Jetson TK1 which has tegra K1 and 16GB emmc onboard, display port and other pros is 199$.
The only plus here is the plastic case….

For the 99$ target, in the meanwhile rk3288 is truly about 99$ with emmc and remote, also S812 has become interesting while A80 seems really pricey for what it adds (hope to be wrong).

511 Mbps speed achieved on the Optimus A80 board LAN interface … still by far the best so far … compared to 482 Mbps imx6 cuboxi / matrix LAN interface.

I would like to see at least 800 Mbps speed on an ARM platform but hard to believe is this possible soon.

So one direction is OK, and the other not so.

@ovidiu
Yes, you’re right, Rockchip is basically unusable for IPTV applications in Linux.
Other options could be the Broadcom, ST Micro, Sigma Designs… STB chips, but they are probably more expensive, and they may not always want to work with small companies.

im using the first XU for a small home use iptv backend at one of friends . is performing ok for a single user , its nice that have debian 7 installed with an good sundtek tuner , overall excellent performance for the first big.Little .

got some cubie a80 lubuntu images and will try to test them with A80 optimus board … i understand that there are no hardware differences on A80 platform so far , will simulate same type of iptv backend but with more clients connected.

Well, well, this threw a monkeywrench on my next gen headless distccd cluster plans, was planning to wait for Aarch64 cluster, but at $99 per board…

Hmm, the 64-bit K1, or the Opteron, will likely cost more than what their CPU performance gain is, best bang for the buck just might still be to build one more 32-bit gen cluster.

@Jean-Luc Aufranc (CNXSoft)
BananaPi does gigabit on A20.

@matt
I don’t know how much power the Jetson TK1 consumes, but it is probably considerably more than the XU3 Lite. In addition, it is also quite a bit larger, so it may not be suitable for some projects where physical size is a concern.

I have built a Raspberry Pi powered turntable that I use to capture images for photogrammetry. I use the GPIO pins on the Pi to control the stepper motor on my turntable and then have built a Docker container running on the Pi to send the resulting images directly to the cloud for processing. Would this board work for me or does it lack the GPIO pins (i.e. I need to buy an additional board to control the stepper motor). Perhaps I’m just getting confused, if I could use this board in place of my Pi that would be great… Read more »

[…] recently unveiled a low cost version of ODROID-XU3 board powered by Exynos 5422 SoC, and selling for $99 instead of $179 with the original version that adds […]

[…] issues, I could finally try out Ubuntu, or rather Lubuntu with LXDE instead of Unity, in Hardkernel low cost octa-core development board. I’ll start this review by explaining how to install and setup Lubuntu on the board, followed […]

There even might be GPU support via Tamil driver: http://www.phoronix.com/scan.php?page=news_item&px=MTg4Mjk

Hopefully that goes further than the author’s pretty much defunct Lima driver.

[…] purchase it via Hardkernel website, or one of their distributors. It’s also cheaper than  ODROID-XU3 Lite ($99) with features the same Exynos processor but clocked at a lower […]