Just a few days after noticing code for ODROID-XU in hardkernel repository, the company has now launched ODROID-XU development board powered by Exynos 5410 octa core processor with 2GB RAM, USB 3.0, and more for just $149 (as long as you order in August, $169 after that). 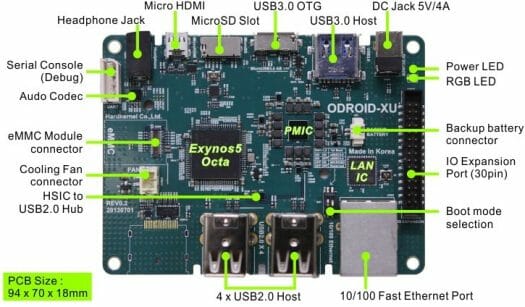 There are two versions to buy: ODROID-XU ($149) that comes with a plastic case, an active cooler and 5V/4A PSU, and ODROID-XU+E ($199) which adds 4 current & voltage sensors (TI INA231 – See video for demo) for monitoring A15 and A7 cores, GPU and RAM power consumption in real-time. Shipping and handling adds $40 for me. You’ll also need an additional MicroSD card or eMMC module (recommended) to install the OS (Android first, then Ubuntu Linux in Q4 2013).

Hardkernel has posted several videos showing off the device, include the unboxing video below.

You can find more information, and/or pre-order the device on ODROID-XU page. Shipment are expected on September 10, 2013.

Hm no GBIT Ethernet and no SATA (probably not supported by the chip), but USB3 is nice

Yes, they are selling the USB3 to SATA3 and the USB3 to GBIT LAN apapter separately.
BTW, you can order $149 model now..

Am I wrong or is the Exynos-5410 package not a BGA!? I see can leads on that picture.

@lgentili They are not leads. Hundreds of tiny passive components.

Holy moly, this plus a cheap VGA adapter like you covered could make a decent mini pc.

Are they really open source? And how about the reliability of their products in the past, does anyone know?

It’s got a fan! Yes, active cooling on an ARM Device 🙂
(the only other I know of is NVidia Shield with Tegra 4)

@NoNoCat That fan was another negative about the XU model, the other being PowerVR, but what can you do. I would not have any problems with active cooling, if it would be user replaceable with passive COTS cooler, and brings in another question about strange design choice virtually all of different PCB designers do… Why not ALL systems use established standard mounts for coolers? Even these sub 2W ARM systems could easily have two small holes in standard spacing to enable el-cheapo chipset coolers to be used, or with these high-power Quad/Octa overclockable SoCs have actual x86 PC CPU cooler… Read more »

@anon:
I guess one reason is not the cost, but the board space that these holes take away right next to the chip (where most of the hundreds of traces need to be routed out).
Oh and the other reason that there is no standard for it 😉

But good idea in general.

@NoNoCat Heh, ok, maybe not standard per se, but de facto industry standards that all chipset/CPU cooler makers/cloners use. And as the ARM chips tend to be quite integrated, their physical package size is so small, that the PoP packaged SoCs don’t have too many large busses coming out of them, thus would easily route all remaining signals, even around few holes (just like on PC southchips, those usually even have more signals than a whole PoP ARM SoC). And the non-PoP packaged tend to have their RAM chips so close to the SoC, that those could fit all under… Read more »

@NoNoCat
The Tegra 3 based Ouya also has a (very quiet) fan.

No Sata no party.

@Anon!
The mounting holes are pretty much the same as some VGA cooling stuff. I can’t find it right now. But a user on our forums had it with a ThermalTake stupidly huge heatsink for some VGA card.

@Fargus
The board is not open source hardware, so although they will do provide the schematics (PDF), gerber and layout files won’t be available. A BSP with source code for Android and Linux will be provided too, but as with others board, GPU/VPU support will be delivered via binary blobs only.

Everything except cables seem to be too overpriced. The 10.1 touchscreen is $250!! You can find that on ebay for 1/2 that price… and what market are they aiming for? Chromebook is portable and easy to carry around so why compare to that when this is an embedded board and if you add all the “xtras” you would need to build a chromebook equivalent it would cost you over $400 for it. For the extra speed very limited in GPIO’s for an embedded solution to real industrial hardware.

I got a defective one (defective the first time I tried to use it). Defective so if they’d just plugged it in they wouldn’t have shipped it. Hardkernel insists that I pay to ship it back, they will not ship another until they receive it and it is up to them to determine whether the board is bad. Depending on where you live and how big a hurry you’re in, you might be dealing with something that has virtually little or no warranty.

can I use all cores (8) at the same time ?
Or is the board switching between the 4core CPU´s ?

@Thomas
I don’t think you can use all eight cores on Exynos 5410, but this is fixed on Exynos 5422 available on ODROID-XU3 and ODROID-XU3 Lite boards.