Jesurun T034 is an Android HDMI Stick that looks just like MK802 V, and with the same specifications. GearBest sent me a sample of this Rockchip RK3288 based HDMI TV dongle that have the particularity to include an Ethernet RJ45 port that most sticks lack. I’ll take a few pictures of the device, and the internal of this product today, before writing a full review.

I’ve received the parcel via DHL together with a dreaded piece of paper reading “Inbound Charges Invoice”. The package is a white brand box reading “Smart TV BOX” with RK3288 logo. 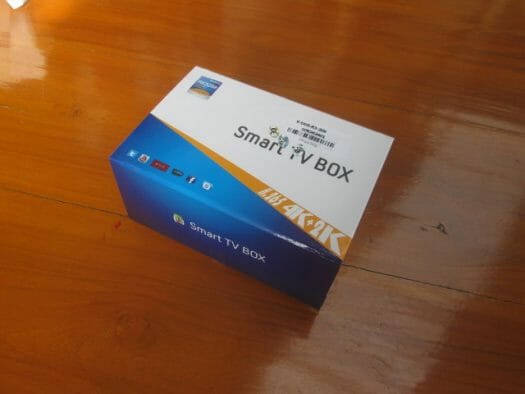 The stick comes with a 5V/2.5 power adapter, a short HDMI cable, a micro USB to USB cable, a IR remote control. and the IR receiver cable. There’s also a user’s manual in English that seems to be for other RK3288 TV boxes (CR12, CR13, and CR16), but I’m sure nobody read these anyway….

Let’s have a closer look at the device itself.

On one end, we’ve got the Gigabit Ethernet port, a USB 2.0 port, and a 3.5mm jack for the IR extension cable, and on the other end an HDMI male connector. A micro SD slot, and two micro USB ports can be found on the side, with one being an OTG port, and the other being reserved for power. The ports are well marked on the bottom of the device. There are plenty of ventilation holes, as well as an external Wi-Fi antenna, and a recovery pinhole.

It’s extremely easy to open the dongle. Simply use a flat-headed precision screwdriver to lift and pop-out the bottom plastic cover.

There’s a thin heatsink covering the Rockchip SoC and the RAM chips, which I have not tried to removed. Realtek RTL8211E is the Gigabit Ethernet transceiver used to add Ethernet to RK3288. The board is called T034_V1_20140726.

Let’s turn the board around to check a few more components. T034 is using the same Samsung KLM8G1WEMB-B031 eMMC flash as in Zero Devices Z5C Thinko (CX-928 board), which, according to Samsung eMMC specs, supports a decent 100 MB/s read speed, but rather slow 6MB/s write speed. AP6330 is the wireless module for 802.11 b/g/n and Bluetooth 4.0 connectivity. The PMIC is again Active Semi 8846QM. So the board is different from CX-928, but interestingly the chosen components are almost all the same.

Jesurun T034 is available on GearBest for $79.98 with JT034CN coupon code. I could also find it on DealExtreme, but few others sell the stick under the brand and model name “Jesurun T034”. However, if you look for MK802 V instead, or just T034, both of which should be the same hardware, you’ll also find it on on Aliexpress, and Tinydeals, but for a price quite higher than on GearBest, at least for now.

I’ll probably write a shorter review than usual for this item, since with Zero Devices Z5C Thinko, I’ll already have had tested an Android TV stick based on Rockchip RK3288, so I’ll focus on Ethernet, and Wi-Fi performance, running a quick Antutu benchmark, and try out the IR extension cable and remote.

i know why you are so busy recently, lol.

cnxsoft :
@Eric
That’s the last one I think… Get to start the reviews now…

ok, check the mail box, and make sure it is the last one. hahahaha

A pity you don’t have a 4K TV. Most of RK3288 devices have a serious problem with their “resolution detection”.

Javi :
A pity you don’t have a 4K TV. Most of RK3288 devices have a serious problem with their “resolution detection”.

if Jean-Luc will add the “PayPal donate” button on his blogs, I think he’ll reach quickly funds for a real 4K TV (with Hdmi 2.0).
He makes deep & neutral reviews on the most ARM devices sell on market

Hmm.. is there a list. Of upcoming devices you are going to test?
Or a wish list of device you like to test? Now and in the futher..

Just a thought.. 🙂
Ps.. thanks for testing all of these devices.. and giving Us end-users advice (hard needed pre-sale knowlege)

@Mitchell It’s never sure, as sometimes people want to send me a device, but finally they change their mind. I have a backlog of things to test right now. Now I’m on M-195, then Open Hour Chameleon, and finally Jesurun T034. After that I want to go back to ODROID-XU3 Lite for Linux, and CubieTruck. Both have problems but I hope they can be fixed in time. I also want to test the USB SATA interface of Draco AW80 and compare it to CubieTruck real SATA interface now that I got a new SSD thanks to CubieTech. So I’m pretty… Read more »

I’ve lost the user manual, where can I down the manual?

Hello Friend,
Have you already tried to run Netflix on this?
I am receiving a green screen from this app…
Tks!