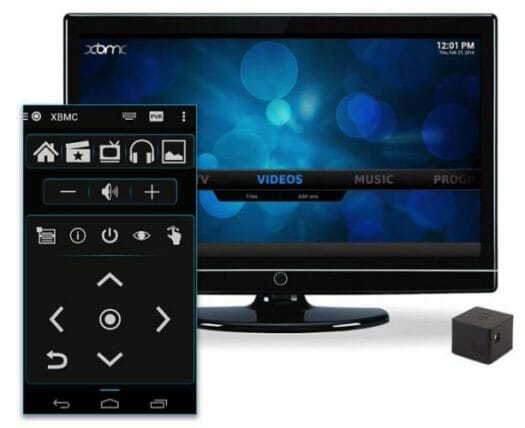 The picture above can be found on CuboxTV product page, but it’s probably a picture of Cubox-i4Pro, as CuboxTV lacks the eSATA port, and the micro USB “service” port (for serial console) according to specifications listed by SolidRun. Other differences include lack of Wi-Fi/Bluetooth connectivity, and 1GB RAM instead of 2GB RAM.

So CuboxTV has been optimized to provide a cost effective solution dedicated to media playback, and while Cubox-i4Pro sells for $139.99, CuboxTV goes for $99.99 during the pre-sale period (first two weeks?), and $124.99 thereafter.

Via Liliputing and Harley.

And another difference: The lack of an IR transmitter. It only has an IR receiver.

Vero is a new Linux based mini-PC / media player from Sam Nazarko that runs OSMC (formerly Raspbmc), looks to be a rebranded / rebadged version of SolidRun CuBox-i2

OSMC (short for “Open Source Media Center”, formerly Raspbmc) is an Linux distribution based on Raspbian and XBMC designed specifically made for and solely optimized for open ARM architecture platforms that supports Linux, such as Raspberry Pi, and is maintained by its main developer Sam Nazarko, (who is also the lead developer of Crystalbuntu and LinXBMC).

@vpeter
Basically but there is more to it, see http://forum.kodi.tv/showthread.php?tid=209785

Whats the graphics performance like ?
I haven’t heard or seen anything good from anything with a vivante gpu

@Job
I don’t think the IR transmitter is important for most users but it has a receiver. Also there’s a free smartphone app for remote control. Sounds nice.

No h265. Sumvision x4 would seem a better option. People have reported success with openelec on that hardware

Some products based on S802 mention H.265, because they can do hardware decoded up to 720p maybe, so that’s a bit of a stretch…

These units are better than any Android box for Kodi, come close to performance of an Intel NUC.

You also get stock Openelec, no custom builds or firmware required, burn image to SD card and your up and running.